There are walking tracks, also used as cycle tracks, on both sides of the Tarawera River where it runs through Kawerau, with bridges over the river on SH34 at the northern end, by the golf course (pedestrian only) at the southern end, and on Waterhouse Street about halfway between the two ends. The tracks on the western (town) side of the river mainly pass through reserves and parks with no fixed marked tracks, with the ones on the eastern side the tracks rougher, also unmarked, and partly overgrown. Total track length is about 4.7km on the west side and 5.3km on the east.

A map and information panel outside the Kawerau I-Site shows walking tracks alongside the Tarawera River, on both sides, between SH34 (Tamarangi Drive) to the north and the Kawerau Golf Course to the south. The text “Roy Weston Walk” appears alongside the river and the walking track. It seemed natural to assume that the complete walk was known as Roy Weston Walk. But that would be an incorrect assumption. Roy Weston Walk is a small reserve alongside the river between Firmin Field and Lyn Hartley Reserve. The complete track apparently does not have a name, but the western side of the northern end is found on the Kawerau Information web site as Tarawera River Walk, and the southern part on both sides as the Tarawera River and Forest Walk. There are short descriptions of these on the site. 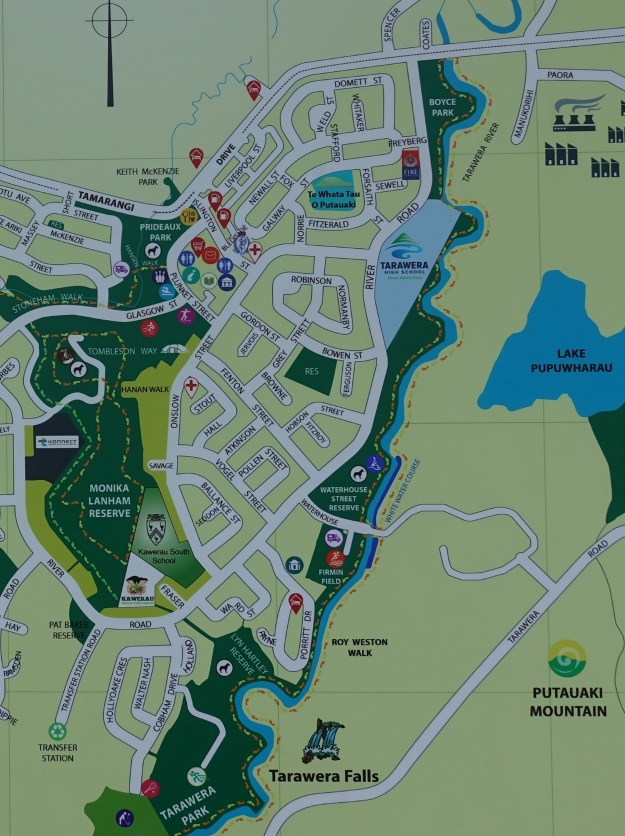 The walk described here was done starting on Waterhouse Street, heading north on the western (town) side through Waterhouse Street Reserve and Boyce Park, crossing over the river on Tamarangi Drive (SH34), and then heading south on the eastern side back to Waterhouse Drive. After a short lunch break it continued south along the eastern side to the blue bridge across the Tarawera River then north on the western side alongside the golf course, through Tarawera Park, Lyn Hartley Reserve, Roy Weston Walk and Firmin Field back to Waterhouse Street. Total distance walked was 10km, excluding a few wrong turns, for a total walking time of about 2 hours and 30 minutes. 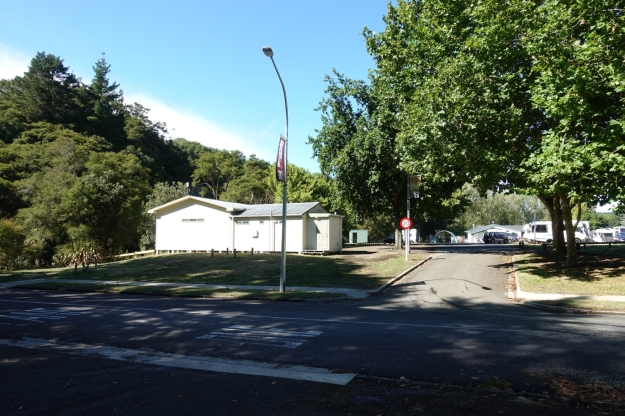 The start of the walk heading north through Waterhouse Street Reserve, with the river (not visible) on the right.

The wires across the river are used for hanging the slalom markers for the canoeists. 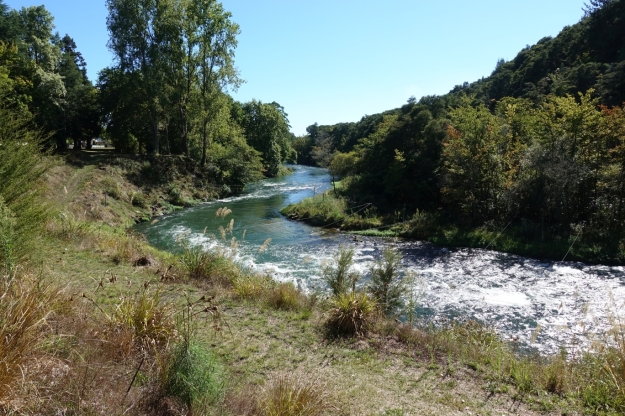 The track continues past the gate along behind Tarawera High School grounds.

The track alongside the Tarawera High School boundary fence on the left can be used, or you can take the track down to the right to follow closer to the river.

Looking north along the river behind Tarawera High School.

And the view upstream with Putauaki/Mt Edgecumbe in the background. 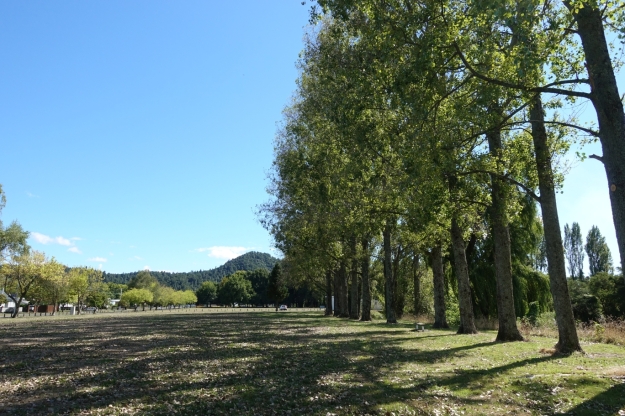 Apparently this part of the river, alongside Boyce Park, is used as a swimming hole.

The northern end of Boyce Park with the SH34 bridge across the Tarawera River. 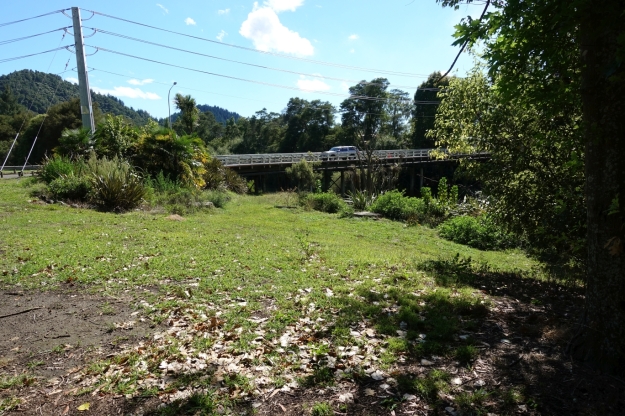 The track on the eastern side of the river, by SH34, starts through a broken gate, following steam and water pipelines for the first part.

Looking back towards SH34, where the pipelines make a right-angle turn with the track following alongside. 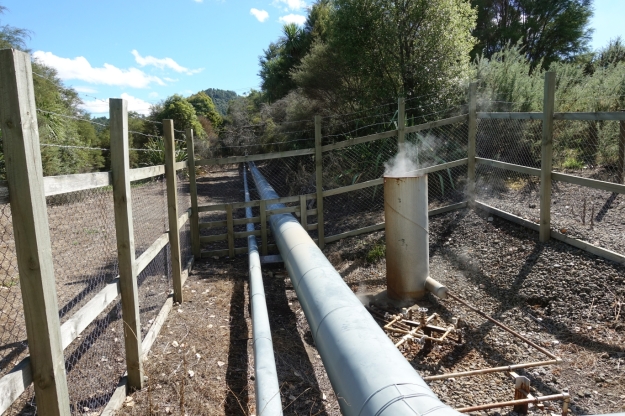 The pipes continue into an industrial area on Manukorihi Street, with the track alongside them.

The track branches off for a short distance through vegetation, mostly gorse.

The track emerges alongside a fence with a sawmill grounds on the left. The track continues alongside the fence.

From the fence the track branches off to the right, with the track on the left heading to Lake Pupuwharau which can just be seen below and to the right of Putauaki. The track continues along a continuation of East Bank Road next to the power poles, a short distance from the edge of Lake Pupuwharau.

The track continues through some rougher vegetation, heading away from the river for a while before continuing on to Waterhouse Street.

In places the track has been well worn and eroded, with very deep ruts. Scrapes along the edges of the ruts indicate that mountainbikers use the track sometimes. On this day not a single person was seen using the tracks on the eastern side of the river.

The track emerges onto Waterhouse Street, with the bridge across the Tarawera River visible on the right. 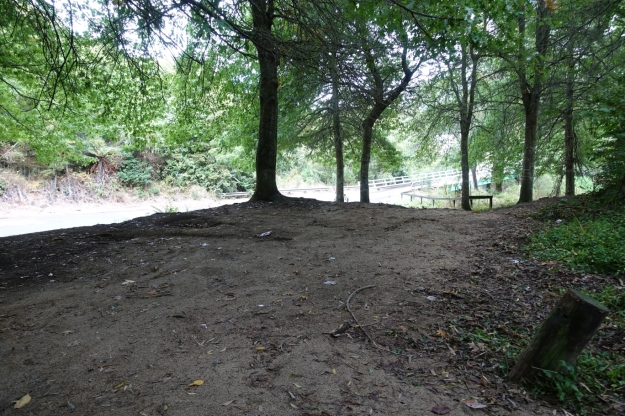 Across the road, next to the bridge, the track heading south continues behind the barrier. 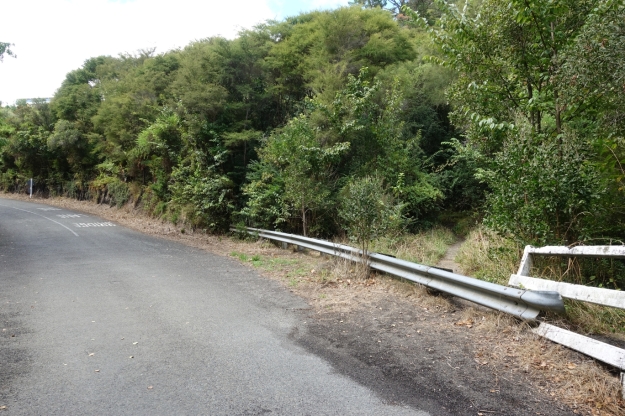 The track climbs quite steeply with numerous steps, climbing a total of about 60 metres.

A short distance without steps as the track heads up to the Maori Investments Ltd building at the top of the picture.

Looking back towards Kawerau township from the top of the steps with the building on the right. The river track continues off-picture at the lower left. 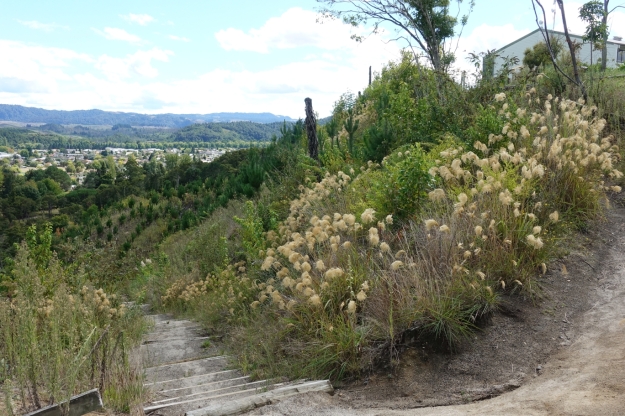 Mt Tarawera is visible from parts of the track, at least until the trees grow taller. 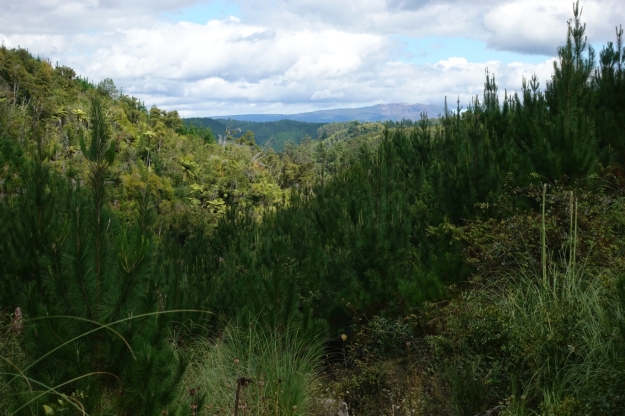 The track is somewhat overgrown in places, with blackberry and pampas grass and various other grasses and plants. Track maintenance is apparently done by volunteers.

The track joins onto a disused road off Tarawera Road. There is a bypass walking track past the closed gate around the tree on the right.

It’s not obvious, since there are no markers, that the river and forest track branches off sharply to the right only a few metres on from the gate (which is off picture to the right). It’s easy to miss this turn as the road itself continues on from here at bottom left. 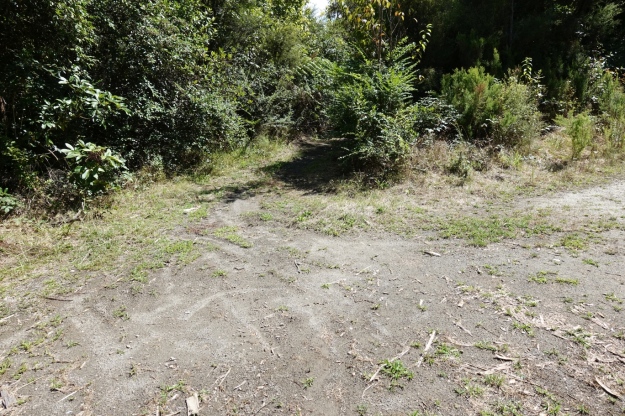 The track returns closer to the river as it approaches the bridge crossing. Here a tree has toppled and taken part of the track and river bank down with it. The bridge is hidden behind the vegetation on the right.

The track emerges onto an open area, with the blue bridge (or pipe bridge) across the river.

The end of the bridge on the eastern side of the river.

Looking downstream (north) from the bridge.

Looking back across the bridge.

The bridge ends by a track on the western side of the river. Coming down off the steps it would seem reasonable to turn right to head back towards the town. However this is only a short track to one of the greens on the golf course. From the steps turn left, and then left again where the track continues under the bridge and heads back alongside the river and the golf course towards the town. For those walking the track in the other direction it may not be obvious that you’ve passed underneath the bridge, as the steps are not visible from the track as it continues on to the south.

The track follows the river and the edge of the golf course as it heads to Tarawera Park. 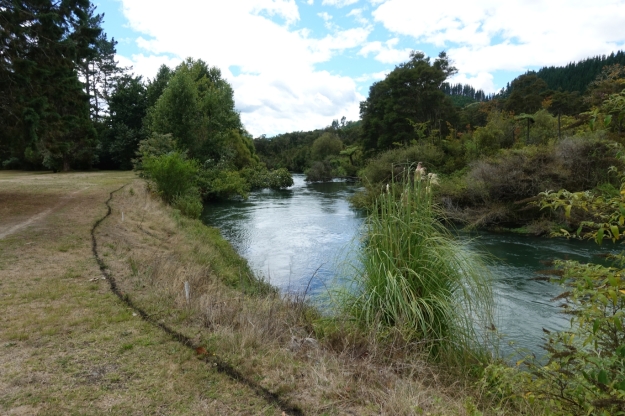 The track crosses a small bridge in Lyn Hartley Reserve as it continues alongside Porritt Drive on Roy Weston Walk.

Looking back along Roy Weston Walk, with Porritt Drive on the right. There are a few parking spaces at the far end of Porritt Drive.

The Tarawera River as it runs alongside Firmin Field, towards Waterhouse Street. 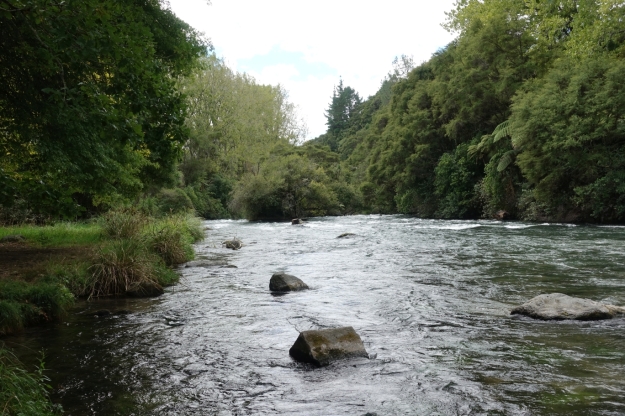 Near the start of the whitewater slalom course, with the Waterhouse Street bridge visible.

The GPS tracklogs show the routes taken. The log has been broken into two separate logs to make the track locations more visible. The first one shows the northern end, with Tarawera River Walk to the left of the river and an unnamed and unmarked track to the right of the river. The second one shows the Tarawera River and Forest Walk, but walked in the opposite direction from the description on the Kawerau Information web site.

Tracklog of Tarawera River Walk, and walk on east bank of river.

The topographic map excerpt shows the same area as the two tracklogs, with some of the tracks marked. However the track shown north of Waterhouse Street is not in the current track location. 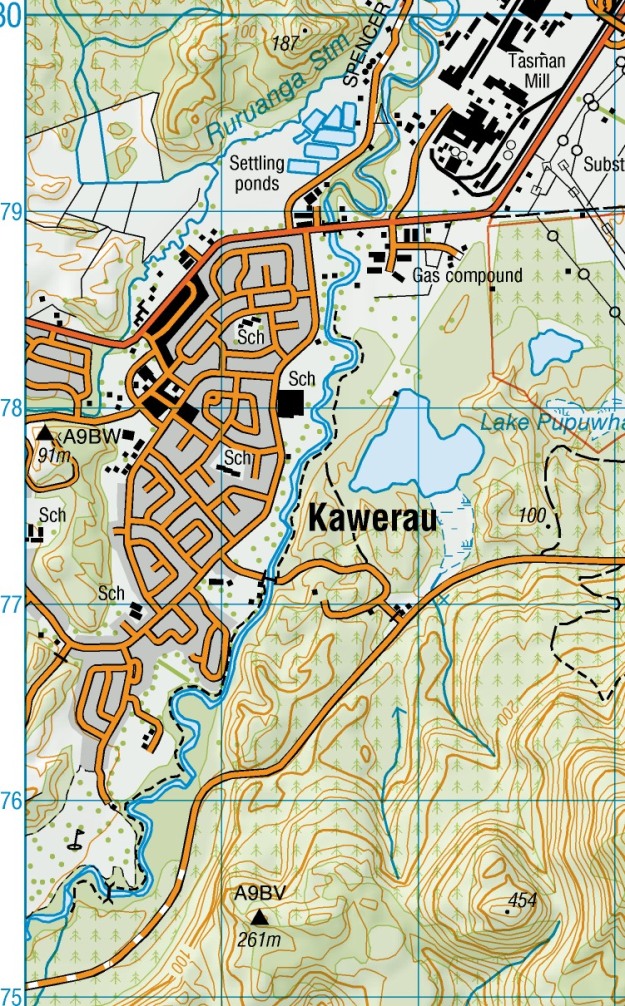 The aerial image, taken from Google Maps, shows about the same area as above.

The tracks were walked on March 10, 2019. Thanks to i-Site staff for information and help with locating the tracks on the east side of the river.