The track to the summit of Mt Pauanui, previously known as Mt Tairua, is located in an area managed by the Department of Conservation, but the tracks are developed and maintained by local volunteers. There is a direct track to the summit, starting near the carpark at the end of Pauanui Beach Road, which is quite steep and uneven in places. Another, less used, track starts at Cave Bay, leading to the summit on a mostly gentler gradient. Together with the walk along the waterfront the two tracks form a loop walk, in a recommended anti-clockwise direction.

There is a short description of the tracks in a brochure, Coromandel Recreation Brochure, which can be downloaded from the DoC web site.

There is a carpark and toilets at the eastern end of Pauanui Beach Road, with the tracks starting nearby. Dogs are not allowed on the summit track.

The loop walk was done in an anti-clockwise direction, with the steeper direct track to the summit followed by the gentler track down to Cave Bay, and along the waterfront past Flat Rock back to the beach and carpark. Total distance is about 4.8 km, with a total time of about 2 hours 50 minutes including 20 minutes at the summit.

The carpark at toilets at the eastern end of Pauanui Beach Road. 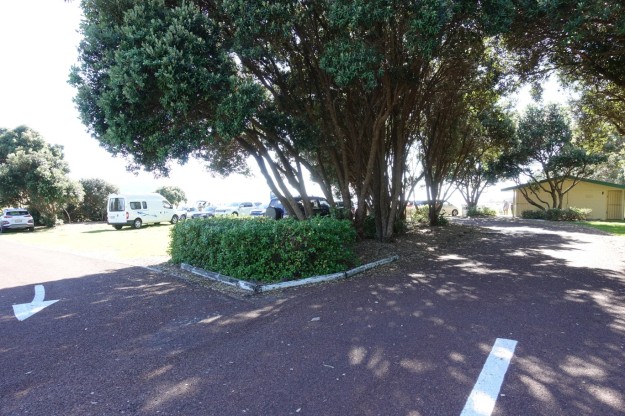 View from behind the toilets towards the start of the tracks. There are 3 information panels in the foreground next to the path. 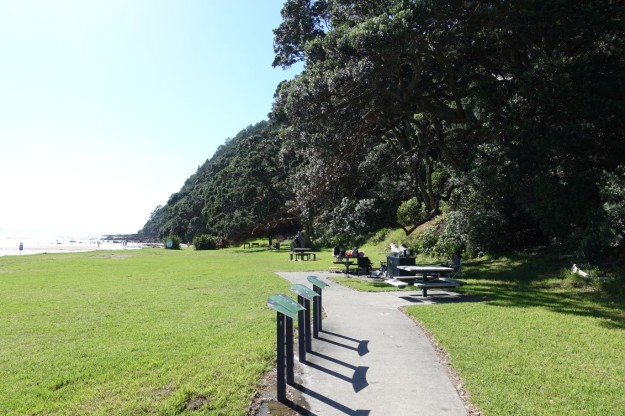 The panels give information about the walks. The Ocean View Loop Walk was not done on this occasion, but starts and ends at the same location as the direct track to the summit.

A map on the information panel shows the location of the tracks. 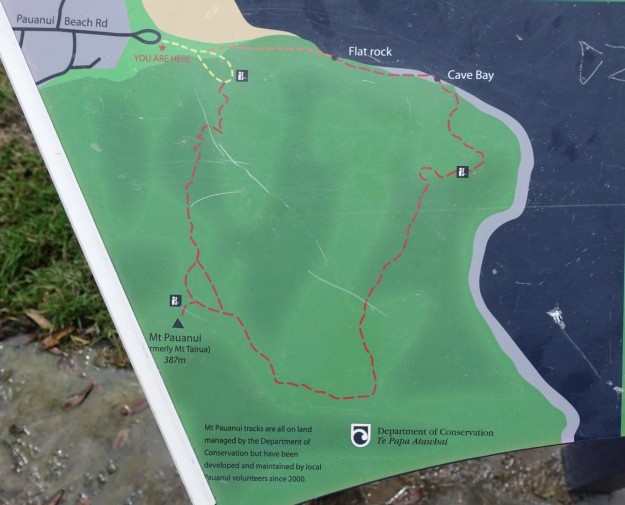 The signs at the starting point of the Ocean View Loop Walk and the direct track to the summit of Mt Pauanui.

The starting point of the Ocean View Loop Walk and the direct track to the summit. 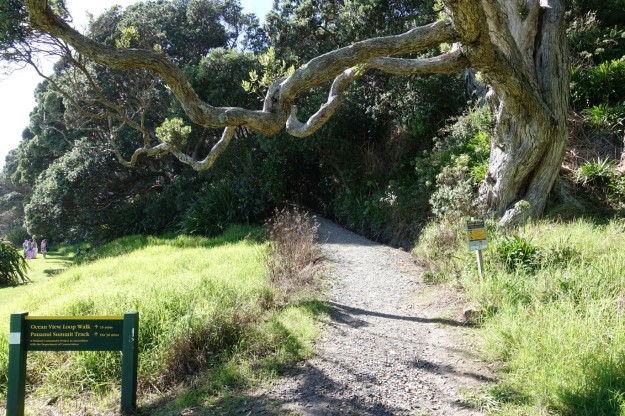 The start and end point of the loop part of the Ocean View Loop Track. The track to the summit branches off to the right, with a partially hidden sign showing the way.

The sign at the next junction, where the summit track branches off from the loop track, has disappeared, with only the two posts remaining in place.

The track zig-zags its way to the summit. It is narrow and fairly steep and uneven in places. 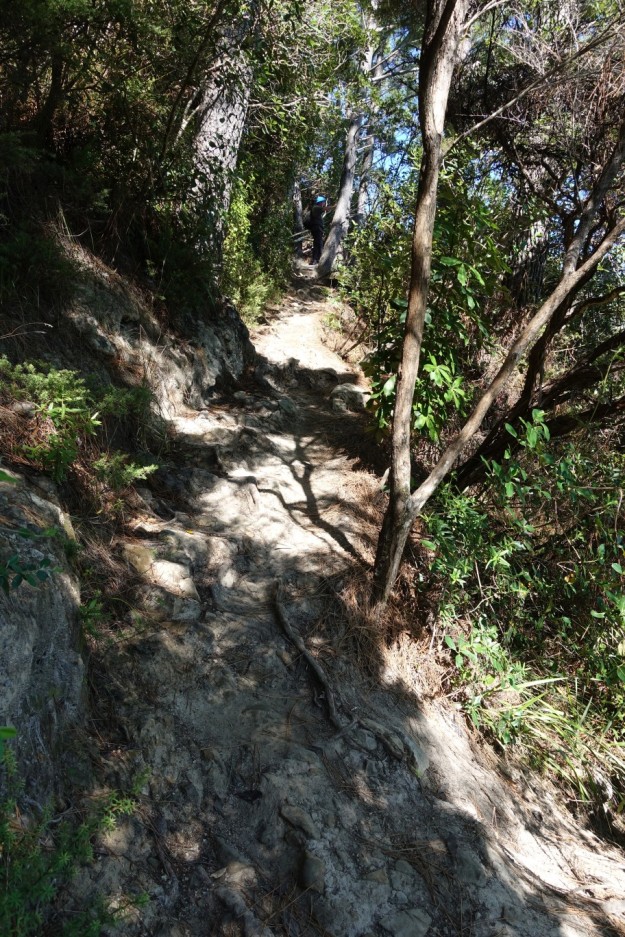 A rocky and uneven part of the track.

In several locations there are alternative tracks. A more direct, steep track, and a gentler track that zig-zags and joins with the steeper track further up the hillside. The gentler tracks appear to be used more than the direct tracks.

Views towards Pauanui and Tairua can be seen from several places along the track, although most of the track is under cover of vegetation.

View over Pauanui and Tairua from the lookout near the trig station at the summit. 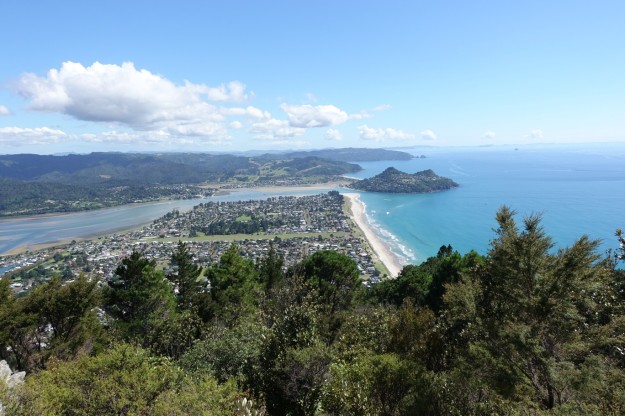 On the day there were 3 planes doing aerobatics and formation flying over the area.

View from the lookout towards the west, with the Pauanui canals to right of centre.

The trig station is a short distance (about 2 minutes walk) from the lookout. The trig station structure has been replaced by 3 plastic marker posts, but the location marker (at very bottom edge of photo) and plaque (behind the plastic post) are present. Elevation is 387 metres above sea level.

Returning a short distance from the lookout there is a track branching off to the east, heading down towards Cave Bay. The signs indicate a 1 hour 30 minute walk to the carpark via Cave Bay, and 45 minutes returning by the steep direct track.

The track towards Cave Bay mostly has a gentler gradient, but is also considerably longer than the direct summit track.

Numerous pine trees on this part of the mountain leave slippery pine needles on the track. Care is required on the steeper parts of the track.

The track ends by the rocky foreshore at Cave Bay.

Looking towards Pauanui from the cave at Cave Bay. The walk back to the carpark continues along the rocky foreshore.

Table Rock with it’s unusual rock formations juts out from the shoreline. 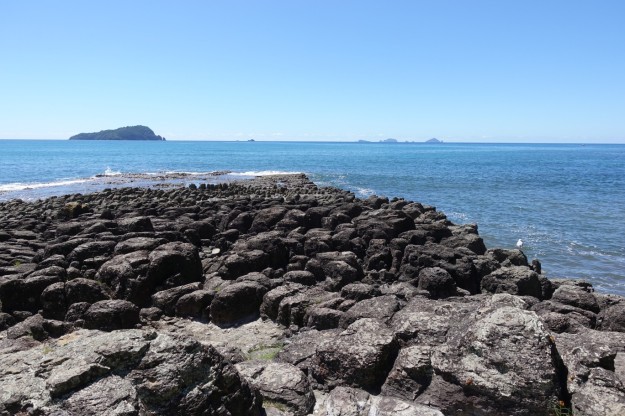 The beach at Pauanui on a warm, late summer day. 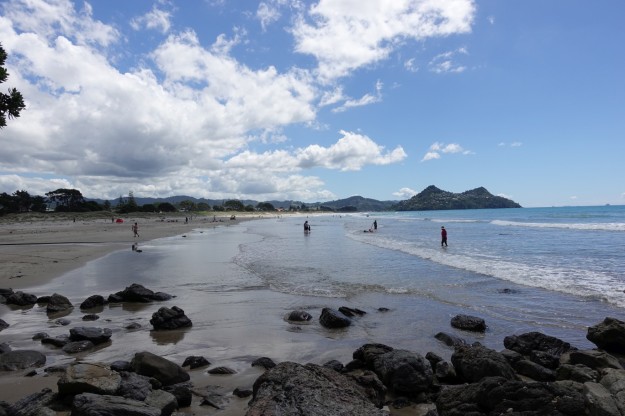 The GPS tracklog shows the route taken, and some of the places of interest. The loop was walked in an anti-clockwise direction, taking the direct route to the summit, and the indirect route via Cave Bay and Table Rock back to the carpark. The track starts from sea level, with the highest point of 387 metres asl at the trig station. The lookout is at about the same elevation.

Total distance was about 4.8 km, with a total time of 2 hours 50 minutes, including 20 minutes spent at the summit and lookout. From the carpark the direct route to the summit was 1.4 km long, and took almost exactly 1 hour. The downward route was about 3.3 km long, and took 1 hour 30 minutes. The most difficult part of the return track was the rocky foreshore. 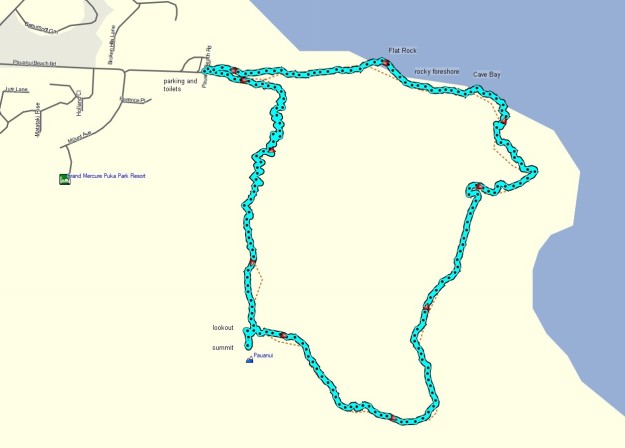 The topographic map shows the track and the topography of the surrounding area. 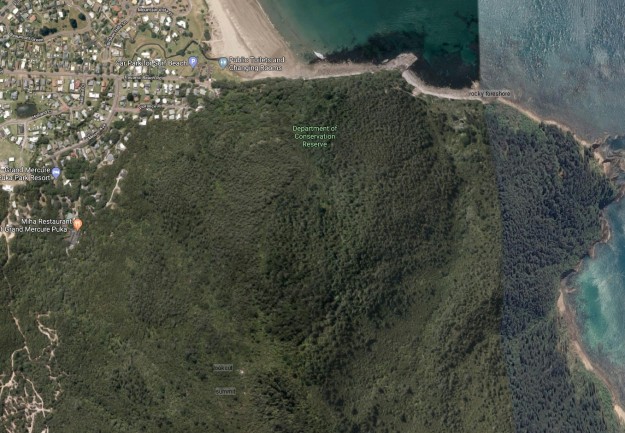