A parking area at the eastern end of Beach Road, Katikati, provides access to MacMillan Reserve to the north, and Tamawhariua Reserve and Coastal Walkway to the south. MacMillan Reserve provides walking and cycling access along the foreshore and then to the eastern end of Pukakura Road. Tamawhariua Reserve runs alongside the foreshore before heading back to Beach Road, ending on Beach Road about 500 metres from the carpark. There are toilets in the carpark, and a boat ramp off the end of Beach Rd.

There appears to be very little information about the reserves, and although the Tamawhariua Reserve is mentioned very briefly in a Western Bay of Plenty District Council page about cycle and walking trails there were no signs on the route indicating it’s name. It is signposted as a public walkway and cycle way and is also open to mobility scooters. Dogs are permitted, but must be kept under control at all times. It appeared to be a popular route for dog walkers. Horses and motorcycles are not allowed.

The walk was done from the carpark, first along MacMillan Reserve to Pukakura Road and return, and then around the Tamawhariua Reserve/Foreshore Walkway to Beach Road and along Beach Road back to the carpark. Total distance about 4.1 km with a total time of close to 1 hour.

Approaching the MacMillan Reserve carpark on the left at the eastern end of Beach Road, Katikati. The boat ramp is straight ahead, between the tree and the lamppost. Tamawhariua Reserve walkway starts on the right at the far end of the hedge.

The carpark at the end of Beach Road. The toilets are in the round white building at the far end of the carpark, with the MacMillan Reserve area on the right. The walk to Pukakura road runs along the grass area alongside the trees to the right. 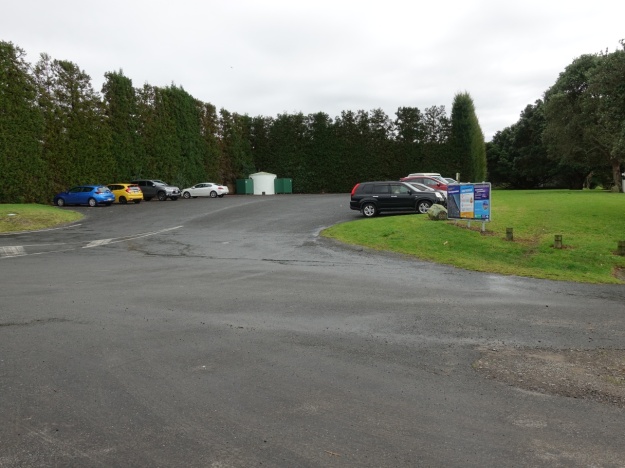 A sign by the carpark shows existing walkways and cycleways in Katikati. MacMillan Reserve is at the top of the picture, which is actually to the east. North is to the left of the diagram.

The MacMillan Reserve walk continues along the foreshore. There are no formed tracks on this part of the walk.

The path takes a sharp left turn heading to Pukakura Road. Presumably it is the intention at some future time to continue the foreshore walkway to join up with the Uretara Stream  and Yeoman Walkway. Pukakura Road ends just behind the shed to the left of the picture. 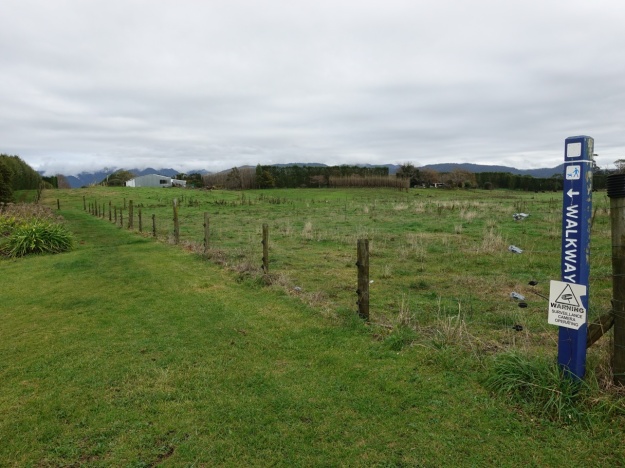 Pukekura Road ends with no turning area, and with possible parking for a few vehicles on the grass area to the right. The shed seen in the previous picture is hidden behind the vegetation on the left. The walkway follows the hedge on the right. 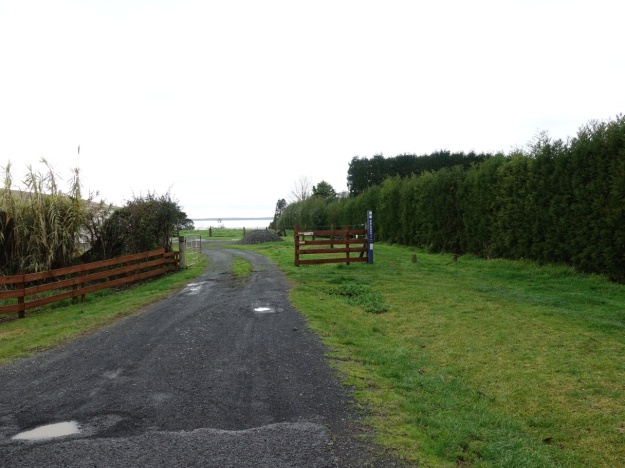 The signs at the end of Beach Road marking the start of Tamawhariua Reserve and Foreshore Walkway. 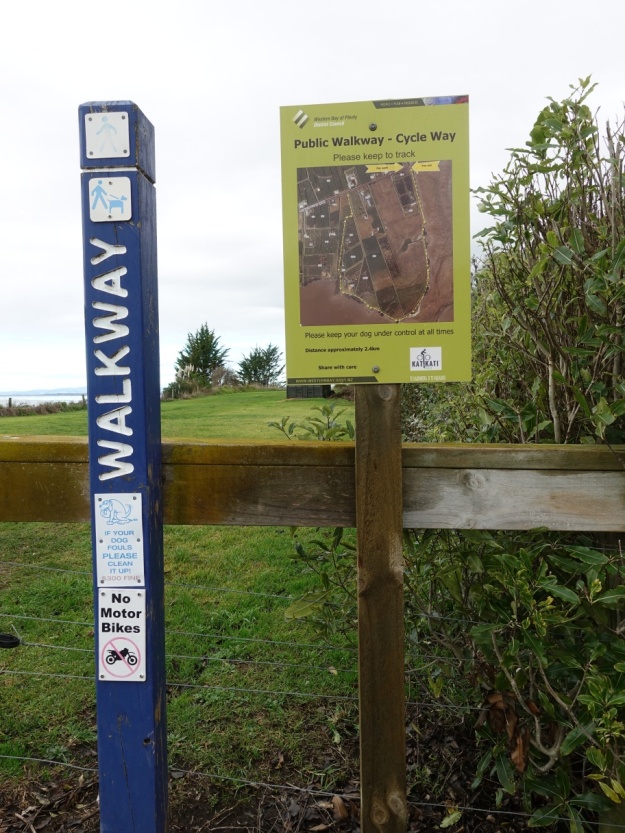 At the start of the walkway Katikati Boating Club has a shipping container for its gear on the reserve, apparently for training junior yachties. The two dogs did not appear to have anyone controlling them.

At low tide the mudflats continue out into the harbour for some distance. This part of the walkway is grass, with no formed tracks.

A few small streams or drains have bridges crossing them. From here a large part of the track is well formed with a gravel surface.

Another bridge, now looking towards the Kaimai Ranges with cloud cover of the tops of the peaks. 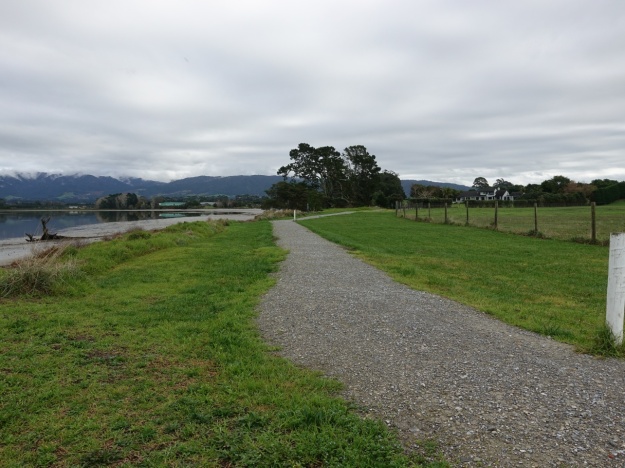 After another small bridge the track reverts to grass as it passes a couple of properties. 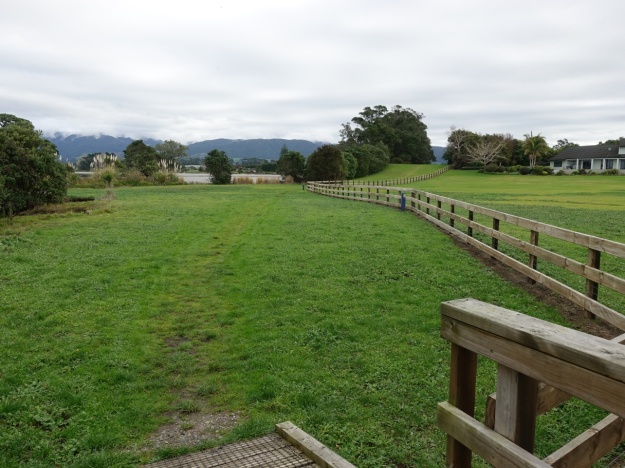 The next properties are not fenced off, but have small signs indicating that it’s private property. A sign hanging from a branch indicates that the walkway continues along to the left. 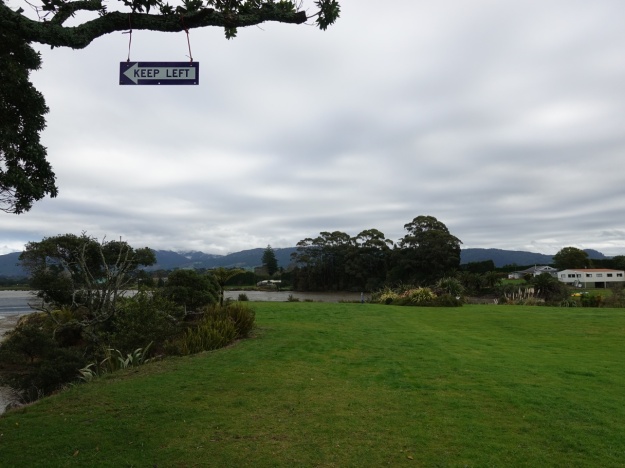 The walkway continues along between the flax bushes at picture centre. A short distance further on and the track again has a gravel surface. 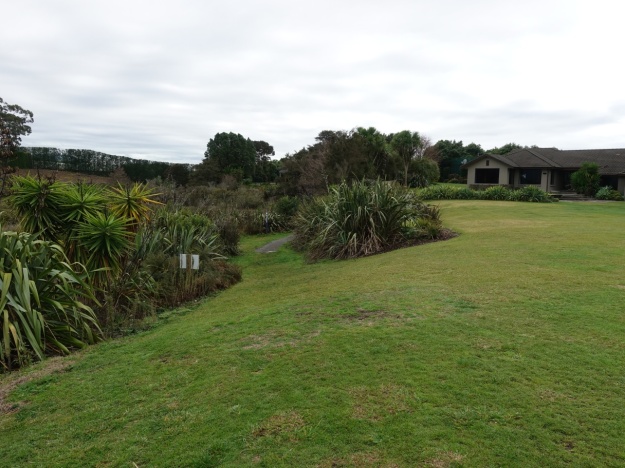 The track continues between manuka/kanuka trees with a wetland area on the left. 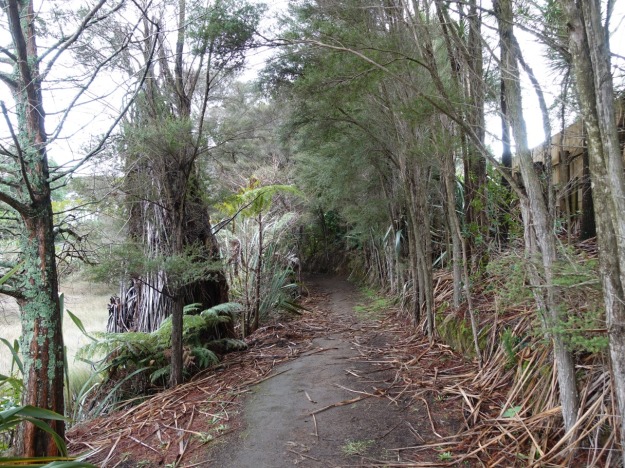 The walkway then continues past a kiwifruit orchard, with hedges on both sides of the track.

A left turn and there’s a short walkway alongside the hedge on the left and the driveway on the right, with Beach Road at the far end.

Looking across Beach Road with the entry to Tamawhariua Reserve/Foreshore Walkway through the steel gates on the right, and the driveway to 258 Beach Road on the left. From here it’s about a 500m walk along Beach Road to the carpark at MacMillan Reserve.

At low tide the boat ramp continues out into the harbour for some distance. This is looking back along the concrete boat ramp to MacMillan Reserve and the end of Beach Road.

The GPS tracklog shows the route followed, first a walk from MacMillan Reserve carpark to Pukakura Road and return, and then around the foreshore on Tamawhariua Reserve to Beach Road and back along Beach Road to the carpark.

Total walking time was about 1 hour, with 20 minutes for the 1.2 km to Pukakura Road (0.6km each way), 35 minutes for the 2.4 km on Tamawhariua Reserve Foreshore Walkway, and 5 minutes for the 0.5km along Beach Road back to the carpark. There are a few short, gentle slopes along the route, but no steps and no steep sections.

The aerial image, from Google Maps, shows the same area as the GPS map. The main gravel section of the track, to the south-east, is clearly visible.