The Haiku Pathway in Katikati was constructed as a unique and lasting Millennium Project. Haiku poetry is carved into river stones along the pathway, in an area alongside the Uretara Stream. The project also included the Millennium Bridge, a footbridge linking the Highfields suburb with the town centre. At its construction it was the only Haiku Pathway in the Southern Hemisphere, and the largest display of boulder haiku outside Japan.

The pathway can be accessed from Highfields Drive, from the town centre, and from SH2 by the bridge over the Uretara Stream. From the Uretara Stream bridge a walkway continues northwards past the Uretara (or Katikati) Landing along the estuary and the waterfront to the Park Road Reserve at the northern end of Park Road. The walkway is known as the Uretara or Yeoman Walkway, and part of it as a Bird Walk, with sculptures of birds beside the walkway.

A parking area by the Haiku Pathway is accessed down a narrow access road from SH2. A sign across SH2 from the entrance points to the access road. There are no toilets or other facilities in the park, but public toilets are available in and adjacent to the Katikati Library on SH2. A track and steps lead from the park to the library.

The Haiku Pathway consists of several hundred metres of concrete paths within the park, as well as a longer path on the western banks of the Uretara Stream between Highfields Drive and the Uretara Stream Bridge on SH2. The walkway from Uretara Landing to Park Road Reserve is about 3 km long. All the paths except the one behind the library leading down to the Haiku Pathway are almost level, with no steps.

The return walk to the parking area from Uretara Landing can be done through the town centre, where numerous murals can be seen on the walls of the shops and other buildings.

The sign on SH2 pointing to the access road, in front of the truck, leading to the parking area by the Haiku Pathway.

Looking down from the access road to the park with the Haiku Pathway and parking area, and across Uretara Stream to Highfields and the Kaimai hills in the background. There are haiku on both the boulders (click on the photo to view a larger version).

Another haiku boulder, and a view of the park and the parking area. Uretara Stream is behind the vegetation on the far left. 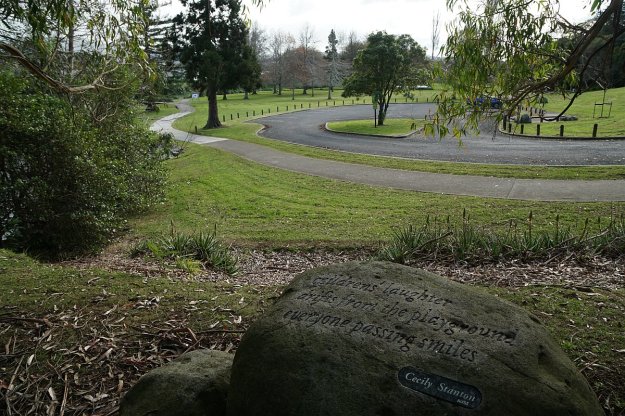 A panel near the Millennium Bridge with details about the pathway, and about haiku as a form of poetry.

Looking across Millennium Bridge to Highfields.

Looking back to Millennium Bridge, with a haiku boulder on the right, and the parking area on the far left. 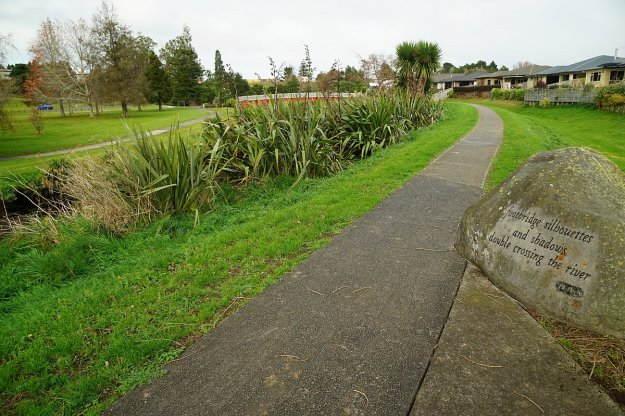 The pathway as it approaches SH2 and Uretara Stream Bridge.

The entrance to the pathway on SH2 by the bridge.

The pedestrian bridge across Uretara Stream next to the SH2 bridge.

Uretara Landing (or Katikati Landing). The walkway continues on the right alongside the stream and Noble Johnston Drive.

At the start of the Yeoman/Uretara Walkway there are bird sculptures, including a NZ Falcon (karearea) on a wind vane and a moa.

An information panel has photos of some of the living birds that may be seen along the way. 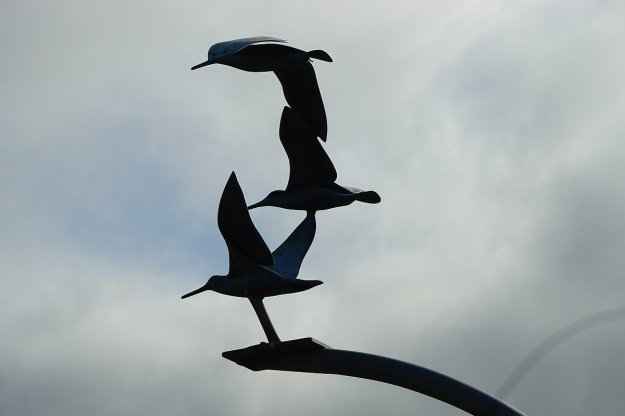 The Yeoman Walkway passes between Uretara Stream or Estuary and a wetland. 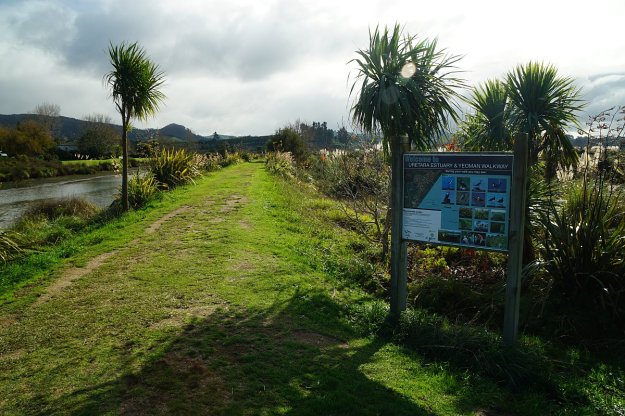 A bittern sculpture on the opposite side of the stream.

A brown kiwi next to the wetlands. Unlike the other birds, this is not its natural habitat.

At the end of the wetlands part of the walkway there is a track on the right leading to Riverside Place. The track to the left continues along the estuary to Park Road Reserve. Several other side tracks lead to other streets off Park Road. 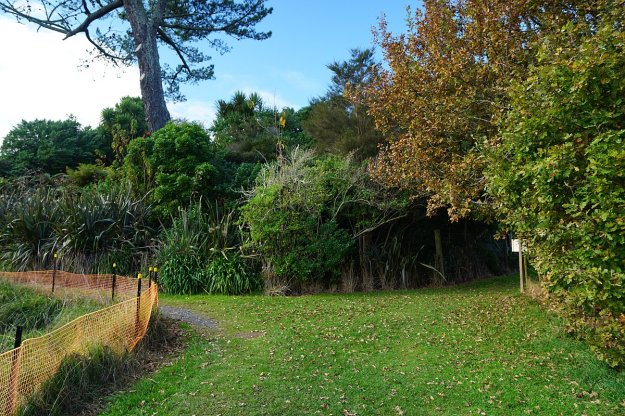 The grass reserve alongside the estuary, on the way to Park Road Reserve.

The waterfront reserve is also accessible from the Levley Lane Reserve, off the picture on the right. A short boardwalk crosses over a small stream.

Looking back towards Katikati across the estuary.

And across to Kauri Point on the opposite side of the estuary. The walkway continues past the trees, by the marker on the right.

Park Road Reserve, with the new Summerset Retirement Village on the right, a parking area, and the Tauranga Harbour in the background.

Looking from Park Road Reserve across the estuary to Kauri Point.

Back in Katikati township there are various murals depicting the history of the area. 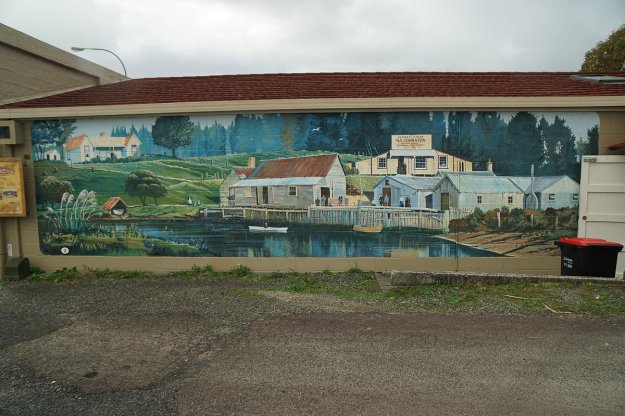 A sculpture of Barry reading the newspaper, with his dog alongside. Outside the Katikati Library.

A path behind the library leads down some steps to the Haiku Pathway. A large mural is painted on the building. The tree to the right is a kauri. 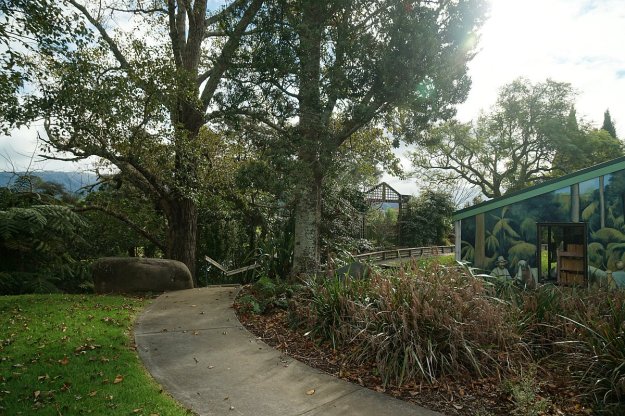 The path leading up to the library on the far right, another haiku boulder, and the Uretara Stream.

The GPS tracklogs show the paths and tracks walked, with the Haiku Pathway and town centre in more detail. Not all of the complete Haiku Pathway was walked this time.

The total walking time, including rest time and camera time, was 2 hours 30 minutes, with a total distance of 9 km. From Millennium Bridge to Uretara Landing is about 800 metres, and from the landing to Park Road Reserve is about 3 km, and took about 40 to 45 minutes each way.

The satellite image from Google Maps shows the area before the retirement village was built (top right-hand corner), and with the wetlands reflecting the light from the sky.