The Warren Cole Walk & Cycleway is a 4.5 km long, paved walkway and cycleway running alongside the Whakatane River, between Landing Road and Whakatane Heads by the river mouth. For most of its length it runs along the top of the stopbank between the river and Whakatane township. It can be accessed from numerous locations along its route, and there are parking spaces and toilets located near several of these access points.

The photo sequence shows the walk starting at Landing Road and ending at the Whakatane Heads. The walk was actually done starting and ending at Mcgarvey Road, first to the Heads and back and then to Landing Road and back, with a short lunch break in the Whakatane Gardens in between. Walking time for the 4.5 km length, excluding breaks, was 50 minutes.

The western end of the walk and cycleway is by the Whakatane Rowing Club rooms on the western extension of Landing Road, west of the bridge on SH30 over the Whakatane River. There are several parking spaces available on Landing Road, but no public toilet facilities nearby. The walkway starts on the right, climbing onto the top of the stopbank. The rowing club rooms are off picture to the right. 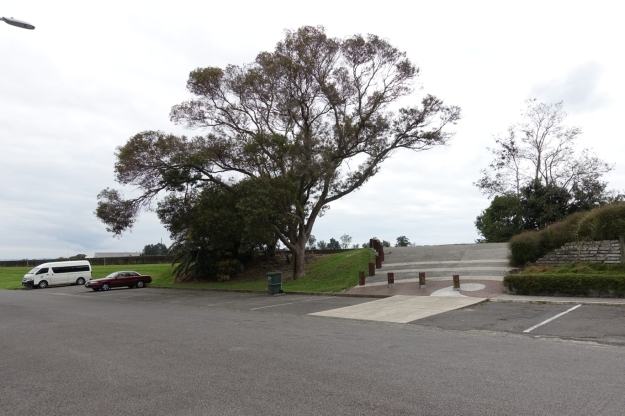 The walkway passes under the SH30 bridge, before again climbing onto the top of the stopbank. The rowing club rooms are on the right.

The walkway is also accessible directly from the roundabout on the intersection of Landing Road, Hinemoa Street, and SH30.

The walkway as it runs alongside Pouwhare Street.

The access point to the walkway from the northern end of Eivers Road. There are a few parking spaces and toilet facilities here. 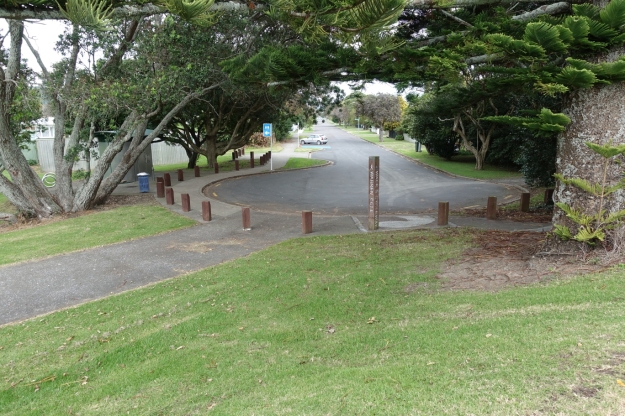 A dog training area is located alongside the walkway, between the Eivers Road access point and the Whakatane Holiday Park off the end of Mcgarvey Road.

Part of the Whakatane Holiday Park, seen from the walkway. The Mcgarvey Road 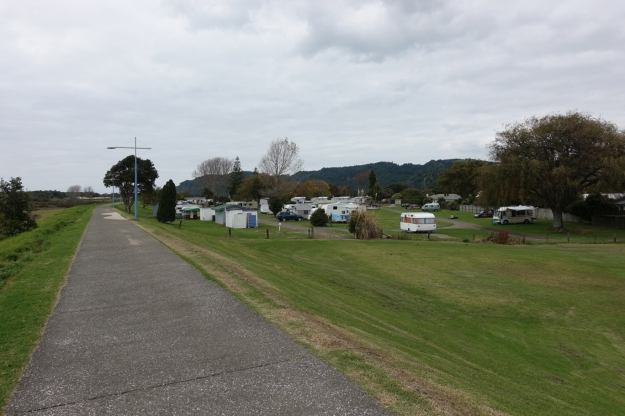 The access point, using steps or a ramp to the top of the stopbank, from Mcgarvey Road, with the Whakatane Holiday Park off to the left and Whakatane Gardens off to the right. There are a few parking spaces and toilet facilities available here.

Near the Mcgarvey Road access there is an area of saltmarsh between the walkway and the Whakatane River. Whakatane Gardens is to the right.

The Whakatane Amphitheatre is alongside the walkway, with the railway line from Whakatane Miniature Railway adjacent to the walkway.

The railway station and railway lines for the Whakatane Miniature Railway alongside the walkway, between the Mcgarvey Road and Peace Street/McAlister Street access points.

The access point accessible from the parking area by the intersection of Peace Street and McAlister Street, with toilets on the left.

There are numerous parking spaces available, including ones for campervans, at the intersection of Peace Street and McAlister Street.

Kiwi Boy, one of the few permanent art works alongside the walkway.

Another permanent sculpture is a memorial to Moko the young bottlenose dolphin, who made Whakatane his home from January to July 2010. He loved to interact with children and adults, making him very popular. Unfortunately he died in July 2010. 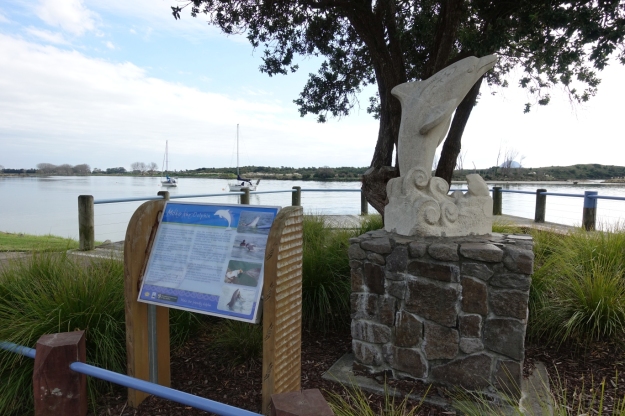 The Whakatane i-Site Visitor Information Centre alongside the walkway, where tourist information and toilet facilities are available. 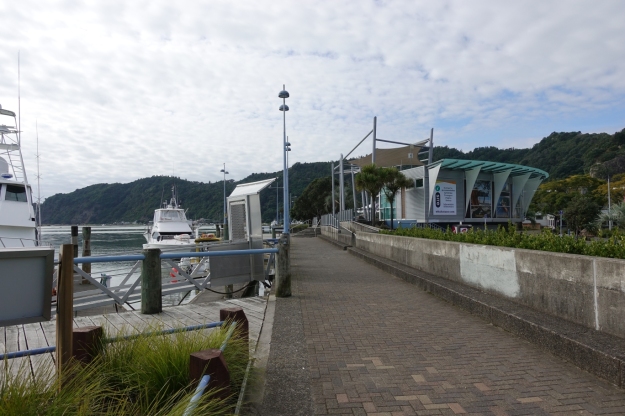 A plaque by the walkway records the origin of the name Whakatane. 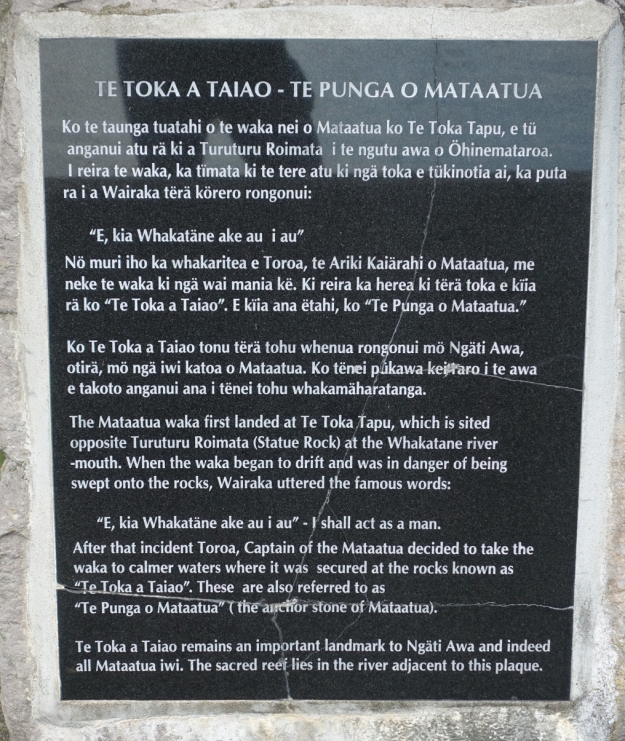 The Mataatua reserve alongside the river with the walkway running through it. 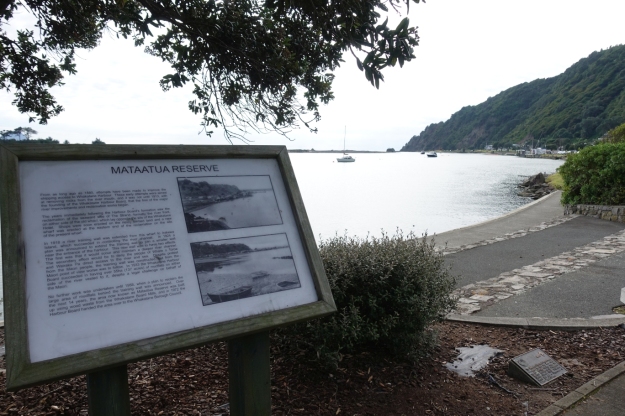 The Mataatua ceremonial waka (canoe) is located in a special enclosure in the reserve.

Looking towards the river mouth the volcanic Whakaari/White Island can be seen in the distance between the two prominent rocks. The rock on the left has the statue of Wairaka on it.

The last part of the walk to the heads follows Muriwai Drive, and can use either the grass area or the footpath alongside the road. The rock to the left of centre  with the vegetation on top is Te Toka Tapu, the one mentioned on the plaque as the first landing point of the original Mataatua canoe.

The plaque for the statue of Wairaka, with the statue above it, the river mouth on the right, and Moutohora/Whale Island in the distance.

Looking back from the Whakatane Heads with the statue of Wairaka, which often has a seagull perched on it. The summit of Putauaki/Mt Edgecumbe is in the distance, between the statue and the cliffs of Hillcrest above Whakatane.

The Whakatane Heads, with Moutohora/Whale Island left of centre, and Whakaari/White Island just visible in the distance between the rock and the headland on the right.

The GPS tracklog shows the walk and cycleway path, from Landing Road at bottom left, to Whakatane Heads at top right. The total length is 4.5 kms, with a total distance of 10 km walked for both directions and a few short side tracks to access points, etc. For one direction the walking time was 50 minutes, with the total walking time for both directions being 2 hours.

The aerial image, from Google Maps, shows the same area as the GPS map.

The Warren Cole Walk and Cycleway was walked, and all photos were taken, on May 5, 2018.