The track is almost 6km long, starting at an elevation of about 155m, and ending at Cashmore Clearing at an elevation of about 600m. The first part of the track has a gentle contour except where it crosses various streams or where gullies have washed away the original track, followed by a fairly steep zig-zag track before leveling out with a gentle rise to Cashmore Clearing.

The track is mentioned in the DoC Kaimai To Coast brochure, but does not have a separate page on the DoC web site.

There are good, recently upgraded, parking facilities at the start of the track, near the western end of Wharawhara Rd. However, there are no toilet facilities nearby.

The track is about 6 km long, and is marked as requiring 2h 30m for the upward direction, and 2h for the return.

The track starts along the access road to the Wharawhara Water Treatment plant before crossing the stream and following the tramway. The parking area is on the left, with the track passing through the gate to the right of centre. Wharawhara Rd continues on the far right. 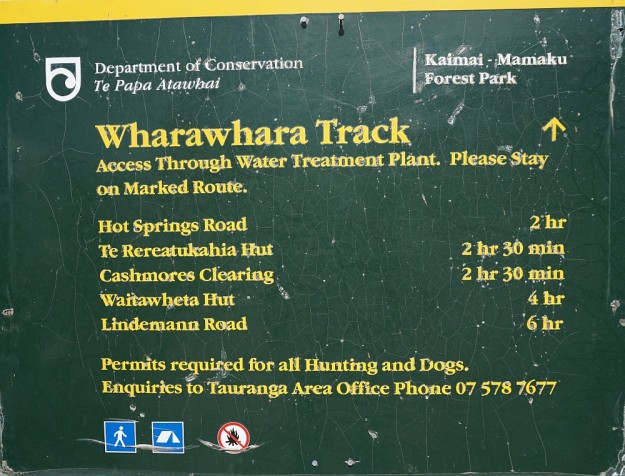 The track passes 3 buildings for the water treatment plant before crossing the Wharawhara Stream.

The first crossing, which uses an old weir. With the stream at this level it’s possible to keep feet dry at all crossings.

Shortly after the stream crossing the track joins up with the tracks to Hot Springs Rd and Te Rereatukahia Hut.

The track follows the tramway with an easy contour, through regenerating native forest. 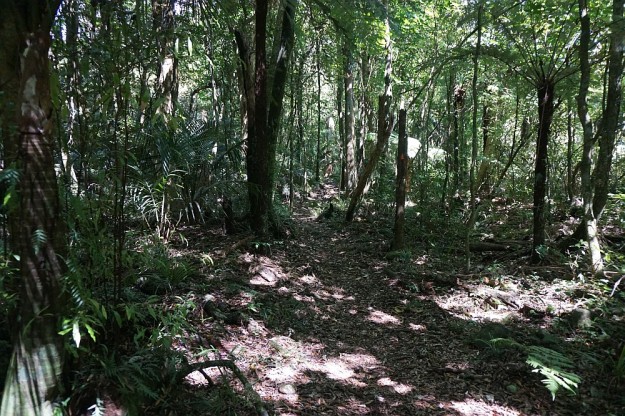 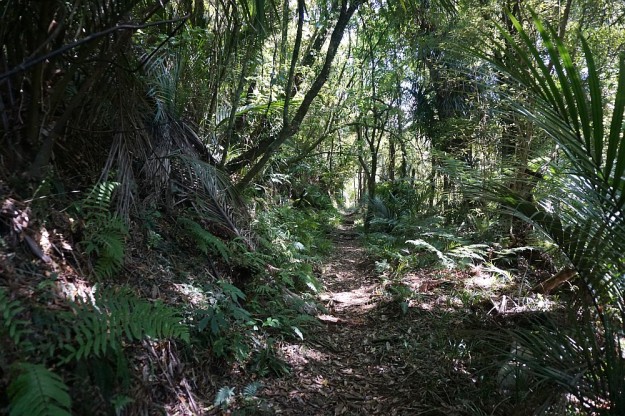 There are few tall native trees which survived the original logging, as well as a few large pine trees visible from the track.

At this time of year the rewarewa trees are dropping their flowers, which can be seen on the track in numerous locations along the walkway.

In several gullies the track takes a small detour where the original path has been washed out.

All the stream crossing have rocks that can be used to keep feet dry. 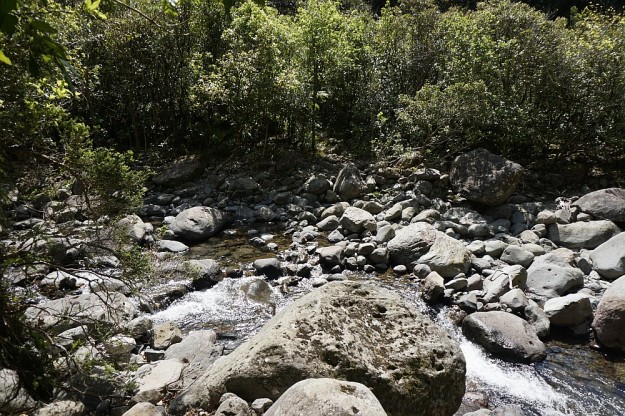 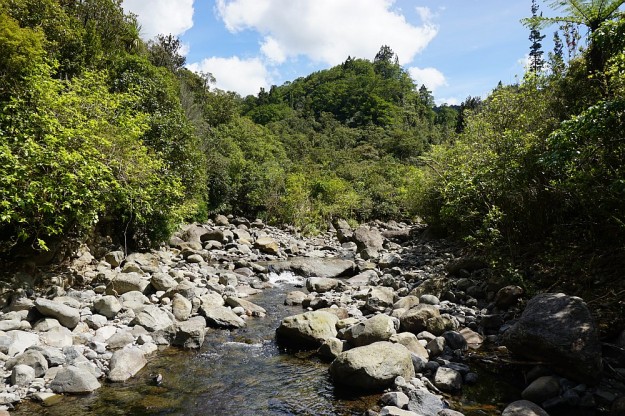 The only steps along the length of the track. 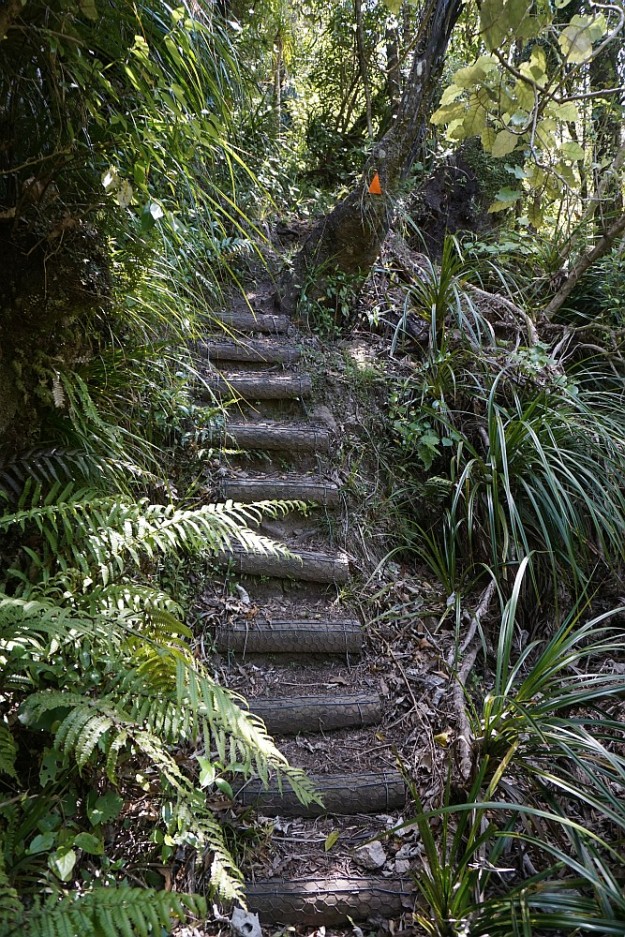 By the last crossing of a small stream this moss-covered wall has water trickling over it. 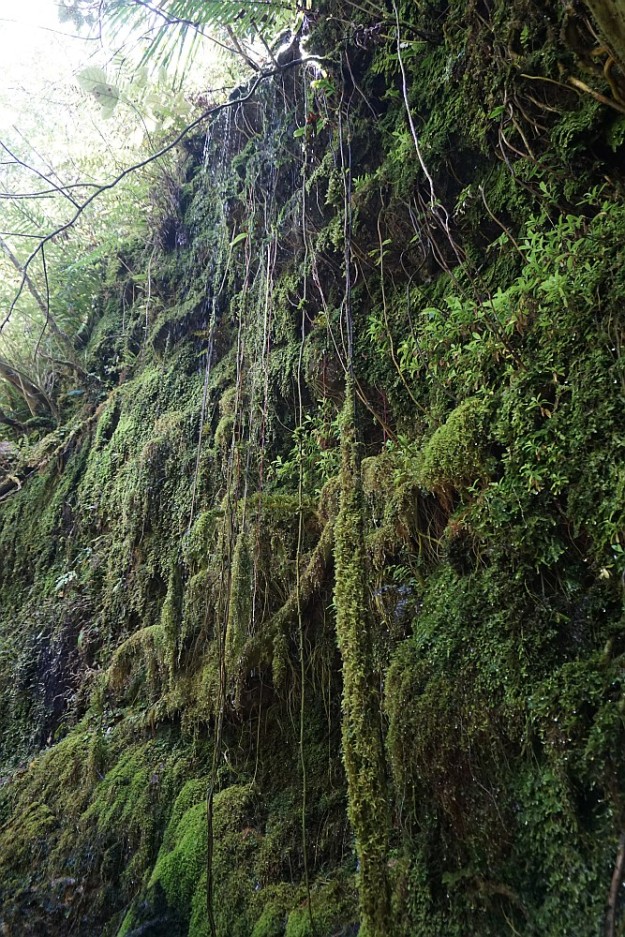 The small stream at the last crossing passes through a small, almost perfectly round, clear rock pool which would be a good place for a cooling dip on a hot day.

The stream leaving the rock pool.

A few views of the surrounding forest near the top of the zig-zag climb. 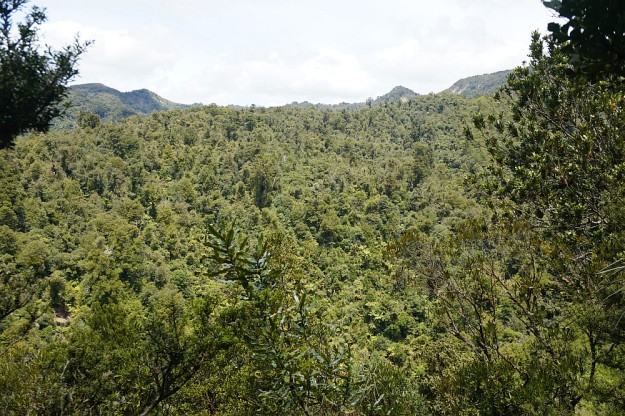 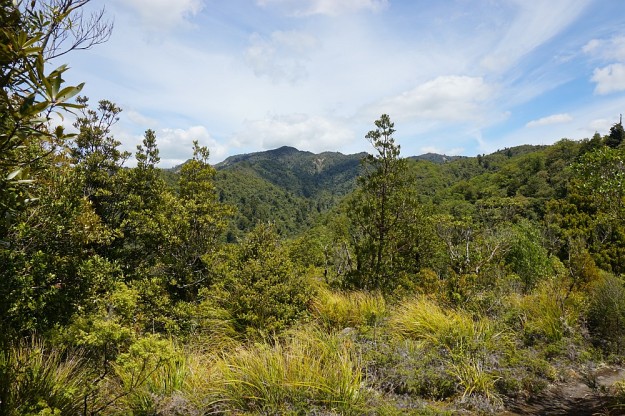 The Wharawhara Track at Cashmore Clearing joins up with the old North/South track, which is in a poor, unmarked condition. 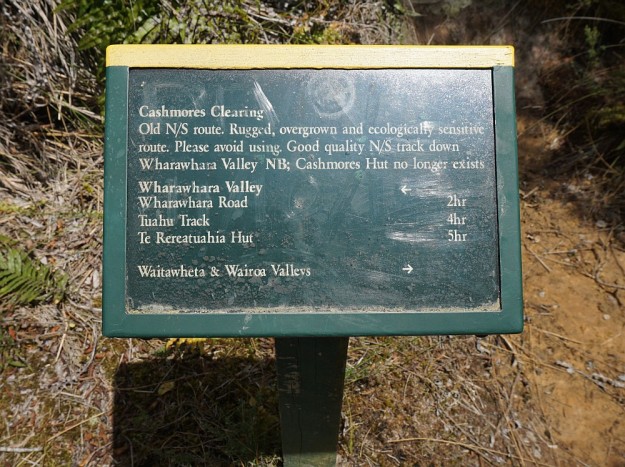 From Cashmore Clearing there are views to Tauranga and Mauao/Mt Maunganui, and part of the Tauranga Harbour.

The track junction, with the Waitawheta Valley track straight ahead, and the Wharawhara Track to the left. Old tramway sleepers are clearly visible here.

At some of the stream crossings the track is not well marked, presumably due to the original track locations and markers having been washed away during flooding. At one location on the upward leg almost 25 minutes was spent looking for the actual track after crossing the stream. On the downward leg there were no problems locating the correct route.

Total distance walked was about 12 km. The upward leg took close to 2 hours 30 minutes, excluding the time looking for the correct track. The downward leg took about 2 hours 10 minutes.

The GPS tracklog shows the route walked. The steeper zig-zag section is near the north-western end of the track. 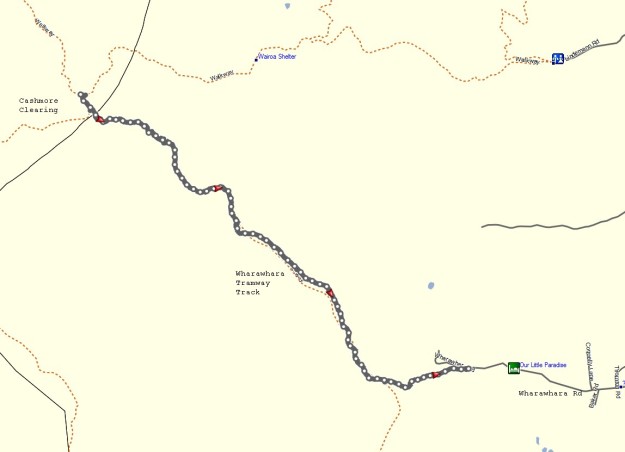 The topographic map shows the track and the surrounding area. 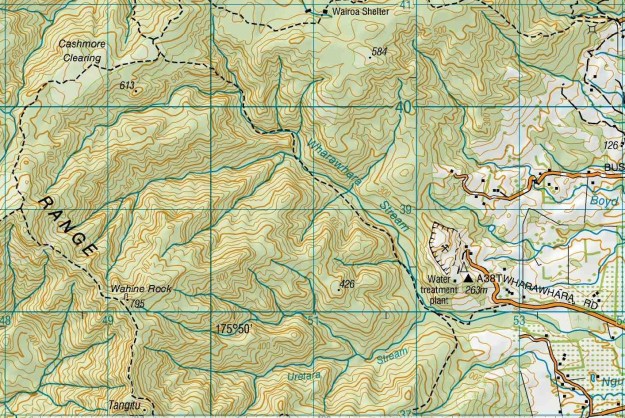