The Karakariki Scenic Reserve was originally set aside as a water conservation reserve. The reserve covers about 486 hectares, and is accessible across private farmland from the end of Karakariki Valley Road, off Karakariki Road which branches off SH23 between Hamilton and Raglan, near Whatawhata. At one time the forest was dominated by kauri but this was milled out in the early 1900s. There is a short, relatively easy, track leading from the end of Karakariki Valley Road to a small waterfall. The track then continues up a steeper hill section, ending at a fenceline but without any views.

There are no toilet facilities in the reserve or at the parking area. Dogs are not allowed, except with a DoC permit.

The distance from the carpark to the waterfall is about 1.1 km, and is shown on the DoC site as taking about 20 minutes one way. The continuation track through the forest adds another 45 minutes to the walking time, but is steeper and rougher. Only about 10 minutes of the track beyond the waterfall was traversed on this walk.

Immediately following a lengthy hot, dry period is not the ideal time to view the waterfall at its best. The photo on the DoC web site shows considerably more water flowing than could be seen in late January 2020. However the pool below the waterfall was a popular swimming spot on the very hot day.

The parking area, to the left, at the end of Karakariki Valley Road. There are two cattle stops to cross before the start of the track, to the left of the shed/hay barn.

The stile at the start of Karakariki Track. The hay barn seen on the previous photo is on the right.

The first suspension bridge is only a few metres from the start of the track, after a short walk down a sloping hillside. 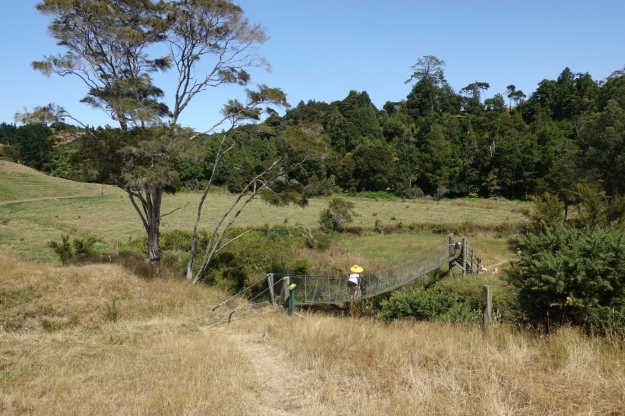 Soon afterwards the track enters a section is partial tree cover. The track is mostly fairly level, following alongside the stream which here has only very limited fall.

There are several stiles to be crossed at fencelines. It’s not an ideal track for a pushchair although there was one family bringing along small children and a pushchair for most of the way.

The track is narrow in places, ,and close to the edge of the stream bank.

The track continues alongside more farmland, with a large shed in a clearing on the right. 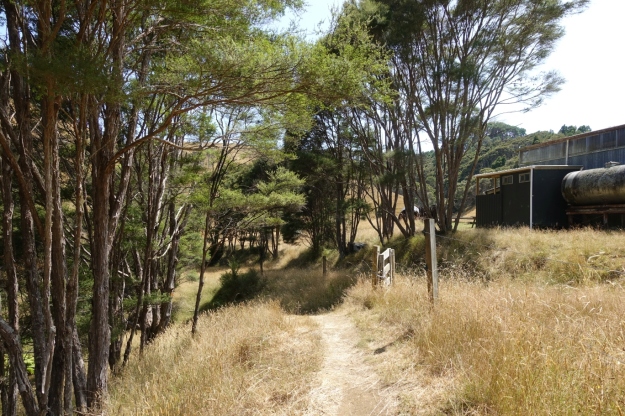 The second suspension bridge is only a few metres further on from the shed, and also very close to the waterfall. 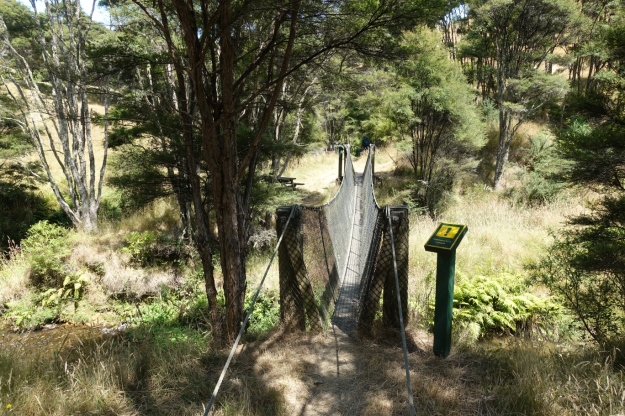 There was very little water flowing over the waterfall, but the pool below was a popular swimming spot on the hot summer day. There are various suitable picnic spots near the waterfall, and according to the DoC web site there are fossils to be found in the stream above and below the waterfall.

The waterfall appears to be about 2 metres high. The photo on the DoC web site shows water flowing across the full width of the rocks. 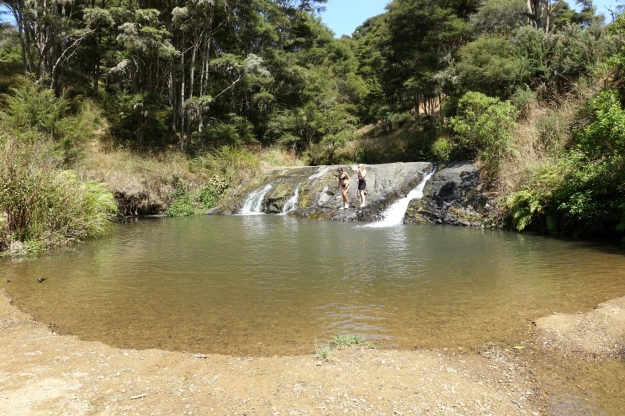 The view from above and behind the waterfall, where there is a small grass area suitable as a picnic spot for a short lunch break on the day. 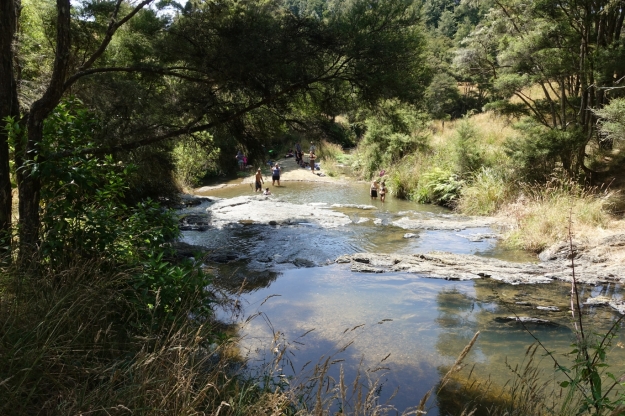 The track continues past the waterfall through denser bush, across an unbridged stream, and across steeper and rougher terrain. According to DoC the track continues for about 45 minutes to a fenceline, with no views.

The GPS tracklog shows the route taken, from the parking area on Karakariki Valley Road on the right, to the waterfall on the left. The dotted line shown on the map as Karakariki Track is not the actual track, but part of it appears to be a farm track.

The topographic map shows approximately the same area as the GPS tracklog. 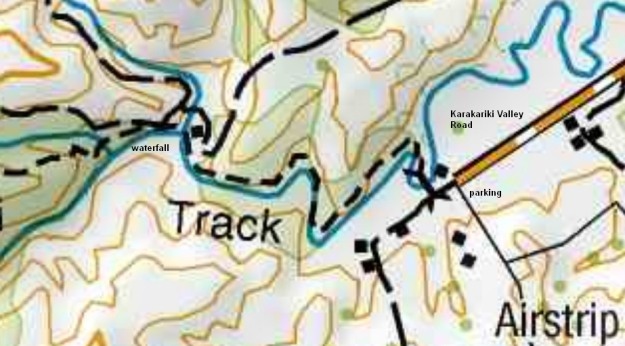 The aerial photo, taken from Google Maps, also shows the same area. The sheds at the start and near the last swing bridge can be seen clearly in this image.