Waiwhakareke Natural Heritage Park is an ecological restoration project situated on the outskirts of Hamilton, attempting to bring back Hamilton’s native flora and fauna. The park is owned and managed by Hamilton City Council, with help from Waikato University, Wintec, Waikato Regional Council and Tui2000. More information about the history, the park, and the project can be found on the Hamilton City Council web site.

One entry to the park is located on Brymer Road, directly across the road from the entrance to Hamilton Zoo. The intention is to create a hub with a common arrival space and facilities. The plantings in the park have been ongoing since 2004, but the park was only open to the public from mid-November 2019.

Parking is available either at the zoo, or in the grass area directly across the road from the zoo entrance. Pedestrian entry is also available off Baverstock Road, almost directly across from Farnborough Drive, but there are no parking facilities. There are toilets available near the lake about halfway around the loop walk, or at the zoo. The walking tracks are wide, with a good gravel surface, and with only gentle slopes. An old barn with information panels is located near the lake. The lake is shown on some maps as Horseshoe Lake.

The walkway forms a loop, with a northern track and a southern track, with other tracks connecting these two as well. From the information shed there is also a short loop track to a boardwalk on the lake shore. The total loop length, without using any of the connecting tracks, is about 2.9 km long. The walk was done in an anti-clockwise direction, starting off on the southern track.

The information panel by the entry to the parking area off Brymer Road across from the zoo entrance provides information about the park and its development. The track followed on this walk was the one shown as the darker track around the outside, and noted as 2.6 km long. Dogs and bicycles are not allowed on the tracks.

Looking back at the carpark area from the entry to the walking tracks. 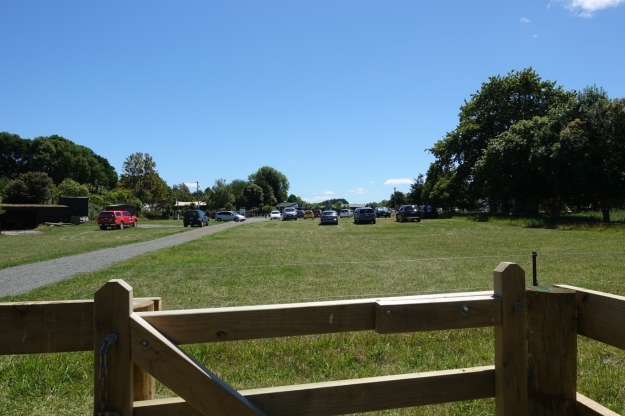 There is a stile to cross at the entrance. Some of the oldest plantings are the ones near the entrance and others down by the lake. The northern track heads off to the left, with the southern track straight ahead past the truck. The grass around the entrance was being trimmed.

The tracks are wide and well formed, with a good gravel surface to walk on. 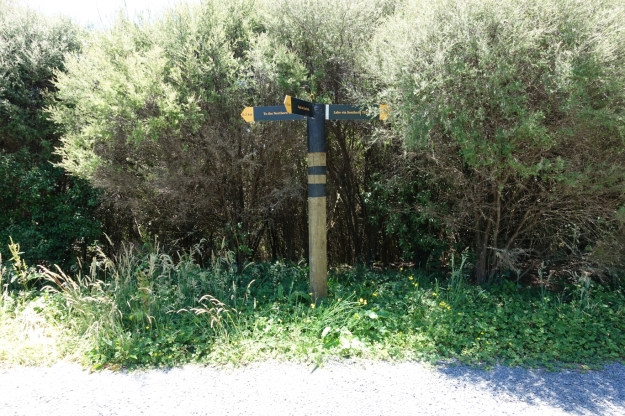 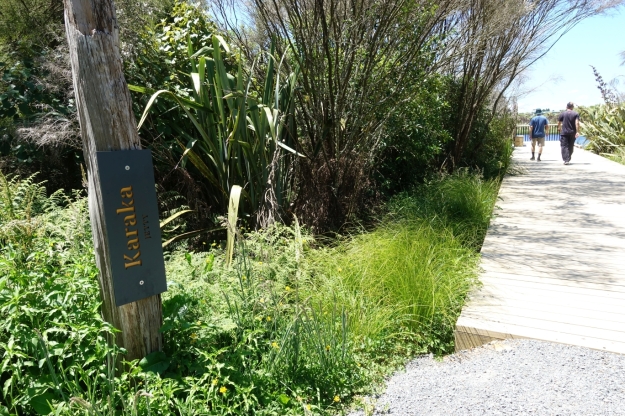 The view across Horseshoe Lake from Karaka Jetty. 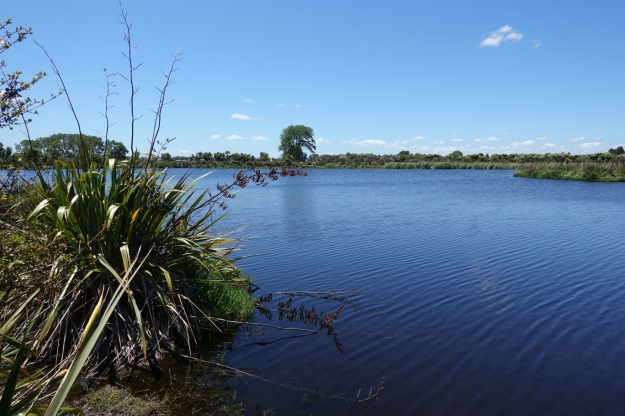 From Karaka Jetty the track continues along the western side of the lake, past the toilets, to an old barn now used as an information centre. The panels show the planting locations, the history of the area, and flora and fauna which can be seen in the area.

Views across the lake from the Kowhai Boardwalk. The first one looking back towards Karaka Jetty. 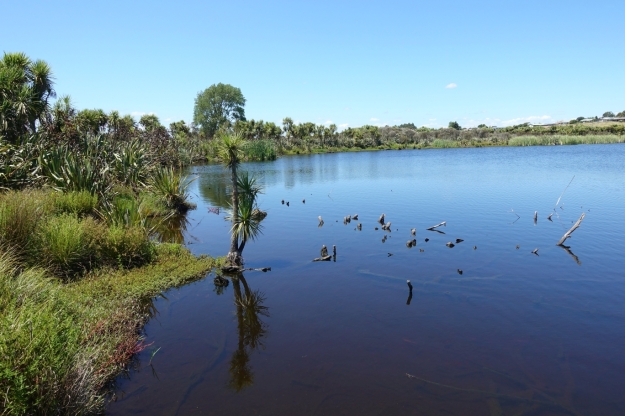 Posts at each of the planting locations show the type of planting and the year in which it was planted. Here the latest planting with the new plantings almost lost in the long grass.

The old barn with the information panels is clearly visible from the junction of the Kowhai Boardwalk loop and the northern track back to the carpark.

The park was farmland until the late 20th century. Fences have been removed and the barbed wire rolled up into artistic balls which are located at various locations alongside the tracks. This one at the end of the Kowhai Boardwalk loop track.

The GPS tracklog shows the tracks walked and the locations of various items of interest. The total distance walked was 2.9 km, taking about 45 minutes including some time at the lookouts and at the information barn. There is only about 25 metres elevation difference between the carpark and the lake.

The aerial image, taken from Google Maps, is shown as copyright 2019, but was probably taken a few years earlier as there is no evidence of the jetty or boardwalk loop track and northern track from the information shed.