Pipiwharauroa Trail is a walking and cycling trail near Raglan, starting from Kawhia Road near Waireinga/Bridal Veil Falls, and ending at the Te Uku Wind Farm. For a large part of the trail it uses a wide gravel road used for access to the wind farm, and for the remainder it uses old farm tracks. The last 1.5 km or so is the roughest part of the trail. The trail passes through actively farmed private land, so dogs are definitely not allowed.

Te Uku Wind Farm is a 28-turbine wind farm, situated on private farmland on the Wharauroa Plateau. It can generate 64.4 MW of power. Construction commenced in 2009 and the wind farm was operational in 2010. It was officially opened in February 2011. Information about the wind farm, including photos from the construction phase, can be found on the Meridian Energy web site. There is a lookout in Te Uku, on SH23 between Hamilton and Raglan, where part of the wind farm can be viewed from a distance.

Information about the Pipiwharauroa Trail, which was named in June 2011, can be found on various sites, including the Waikato District Council site. Some sites claim that the trail is closed in August, September and October for lambing, but in mid-September there was no indication of closure.

The trail is almost 9 km long, with a 17.5 km distance from the car park just off Kawhia Road to the end of the trail and back again. Signage shows the walking time as 4 to 5 hours return, and cycling time 1 to 2 hours return. There is an elevation difference of almost 300 metres between the lowest and highest points on the trail. The lowest points are near the car park, and the highest points at the wind farm. Most of the farm gates on the trail have a small adjacent gate which can be used for walkers and cyclists. However there are two locked gates where bikes will have to be lifted over the fence. This could be a problem for anyone riding a heavy e-bike on their own, as the stiles are not really ideal for the crossings.

The view of the wind farm from the lookout on SH23 at Te Uku. The parking area also has an information panel about the wind farm. Some of the 137-metre high towers can be seen on the ridgeline. 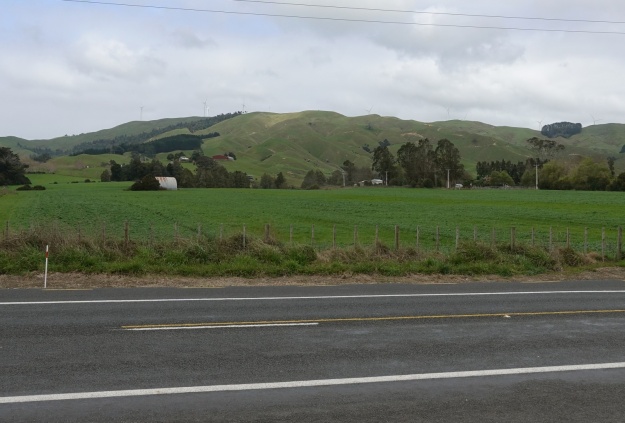 The entry on Kawhia Road, a short distance on from the Waireinga/Bridal Veil Falls, to Pipiwharauroa Trail. The sealed part of Kawhia Road ends here, with the road continuing as a gravel road. Some of the wind turbines are also visible from the car parking area on the left. 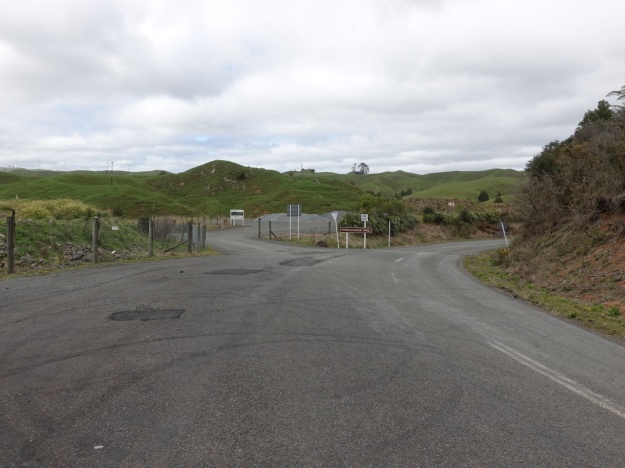 The car parking area off Kawhia Road, looking towards the entrance and Kawhia Road. 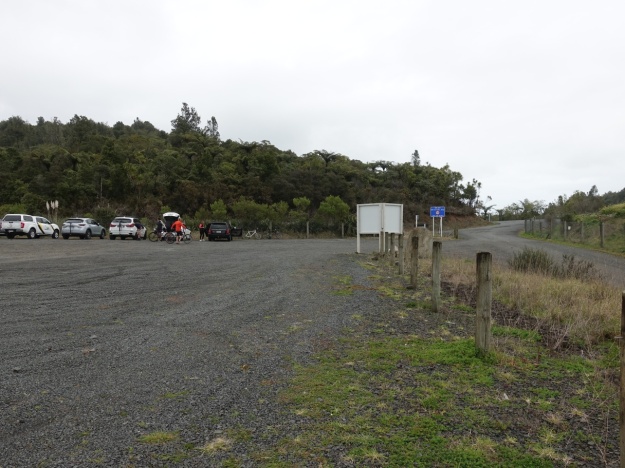 Part of the information panel located at the carpark. 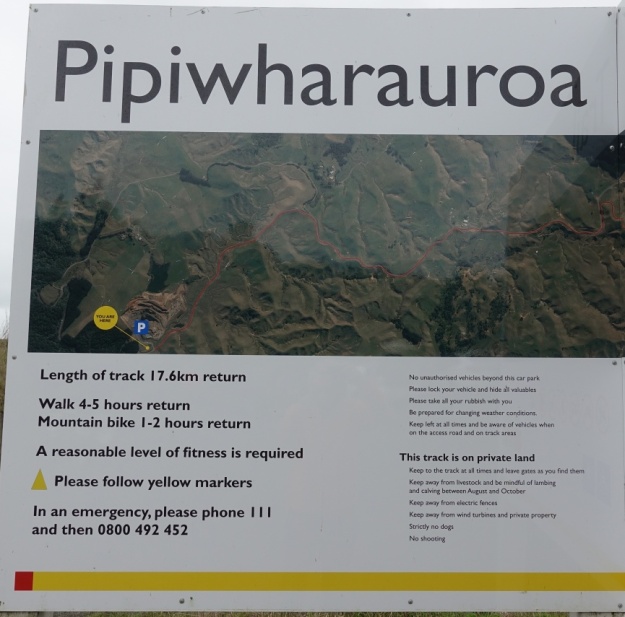 Adjacent to the information panel there is a rock with a plaque giving details of the history and naming of the trail. 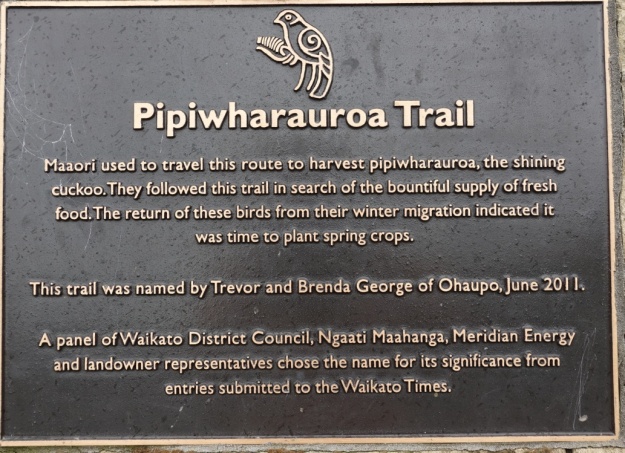 The trail starts out on a wide gravel road through the gate on the right. The entrance to the adjacent quarry is on the left. 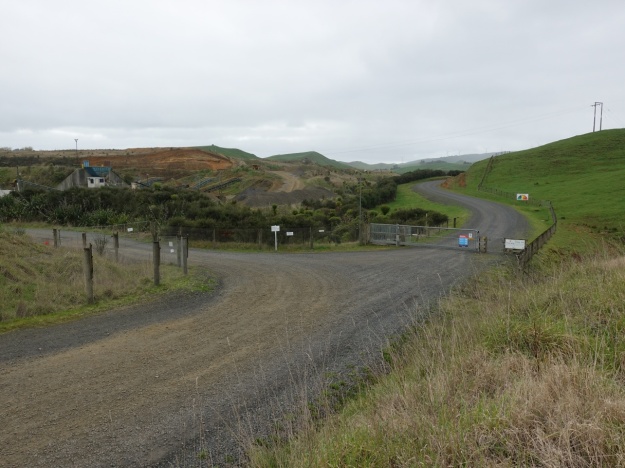 There are numerous gates along the trail. Some of them will be open, and most have a small gate next to them suitable for walking and pushing a bike through, as seen on the right. 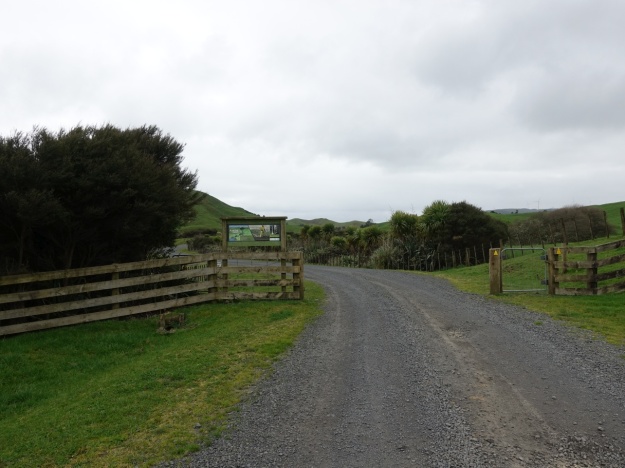 The track branches are well signposted. The trail continues on the gravel road through the open gate on the right. The wind generators can be seen along the ridgeline. 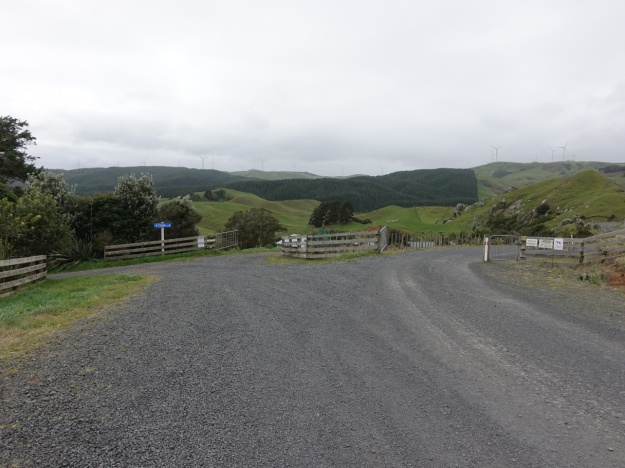 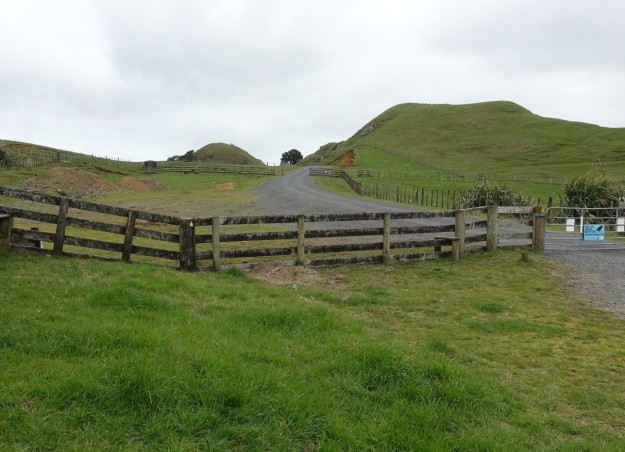 The first branch of the trail away from the gravel road is on the right. The trail continues alongside the fence between the trees to the left. 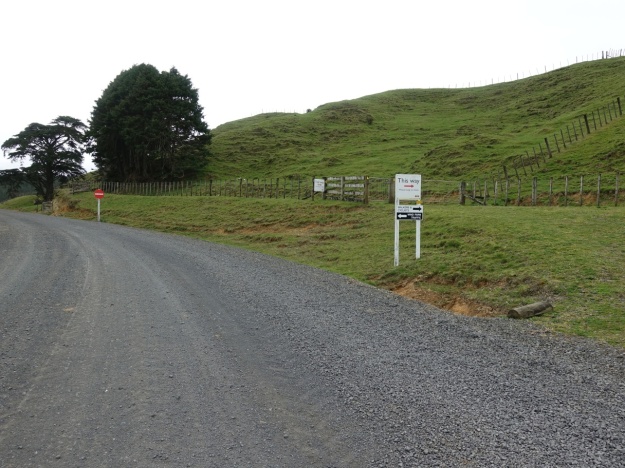 The trail follows a gently climbing farm track, parts of it visible to the far right, before continuing on the gravel road, seen ascending on the left, again. 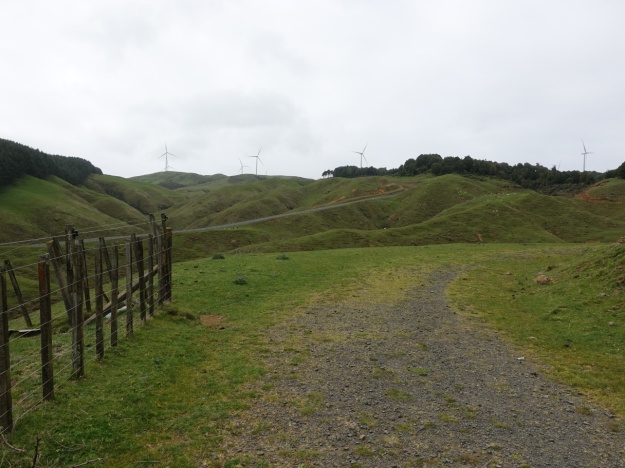 Looking back down from the farm track which can be seen across the middle of the picture from the left side. Mount Karioi can be seen in the distance on the right. 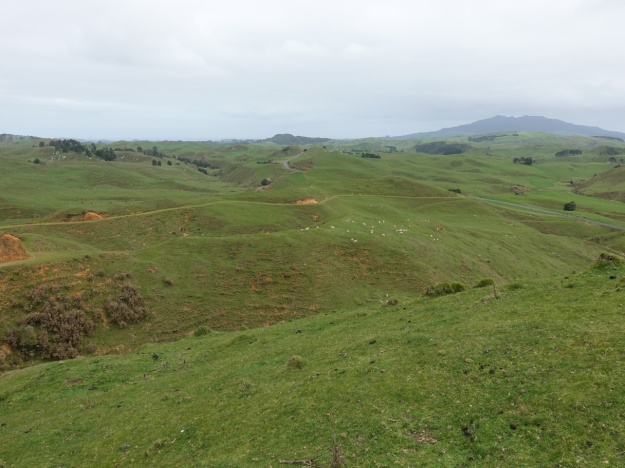 This part of the farm track ends, and Pipiwharauroa Trail continues for a short distance on the gravel road again. 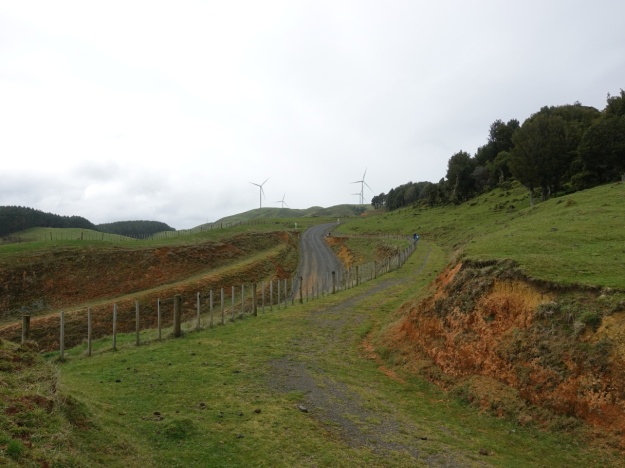 After a short distance on the gravel road the trail again branches off alongside the trees to the right. This part of the farm track is considerably rougher than the first part. 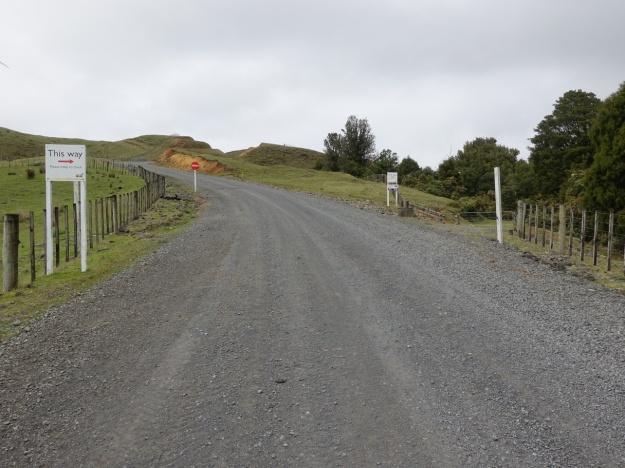 The trail runs alongside a stand of native bush before again emerging onto the gravel road. 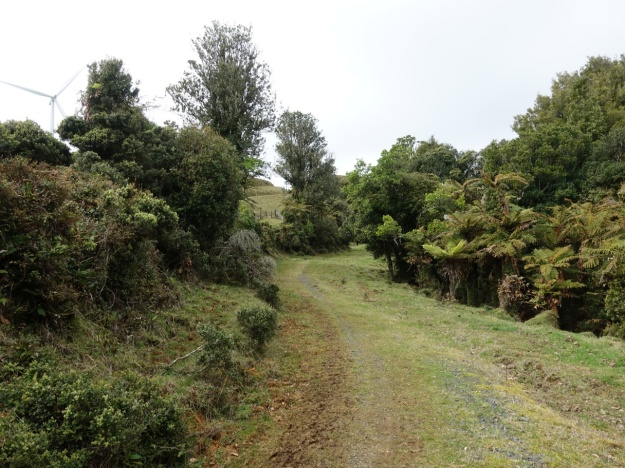 Looking back, with the farm track where the trail exits on the left. A rock on the far left, adjacent to the sign, has a plaque commemorating the opening of the wind farm. 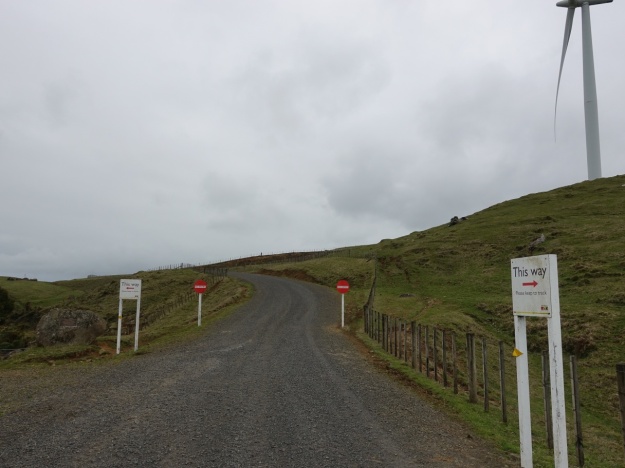 The plaque on the rock, commemorating the opening of Te Uku Wind Farm, also known as Te Hauhiko o Wharauroa. 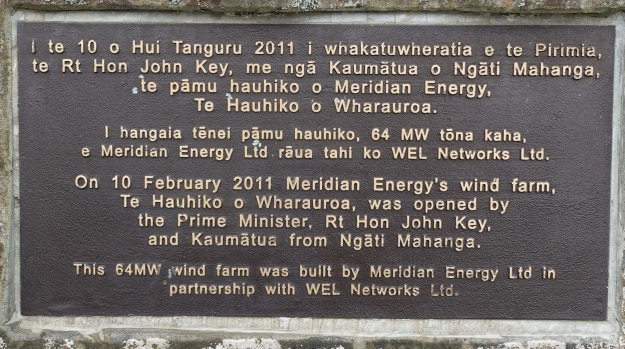 The gravel road ends about 1.5 km from the end of the trail. 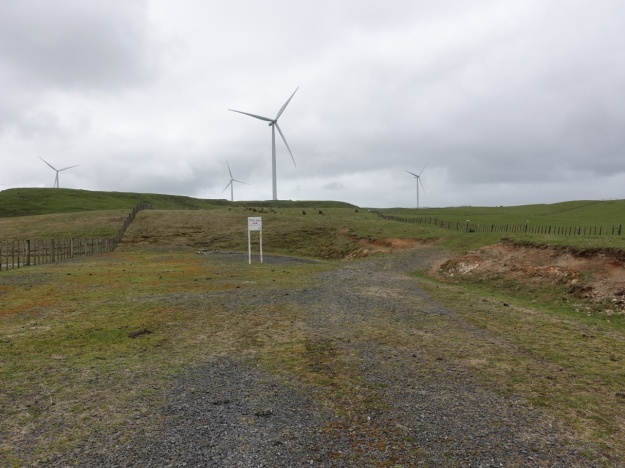 The second of the two locked gates about 1.5 km from the end of the track, with no narrow openable gate, and only a stile for crossing. At least the stile is wider and longer than the first one, so easier to get a heavy bike across. The last 1.5 km of track is the roughest. 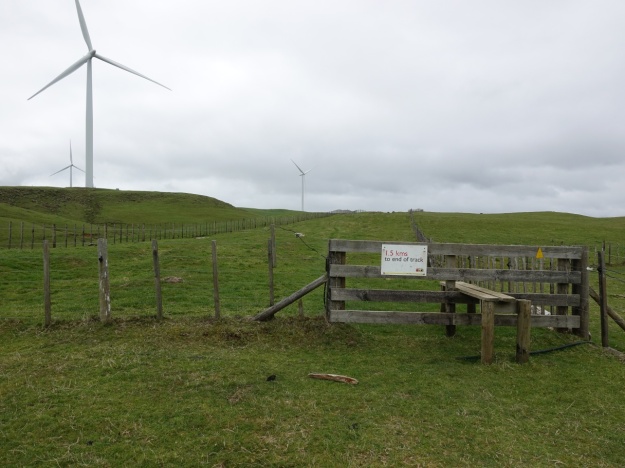 Looking back along the trail, with Raglan Harbour just visible in the distance. There is a short muddy patch to get through. 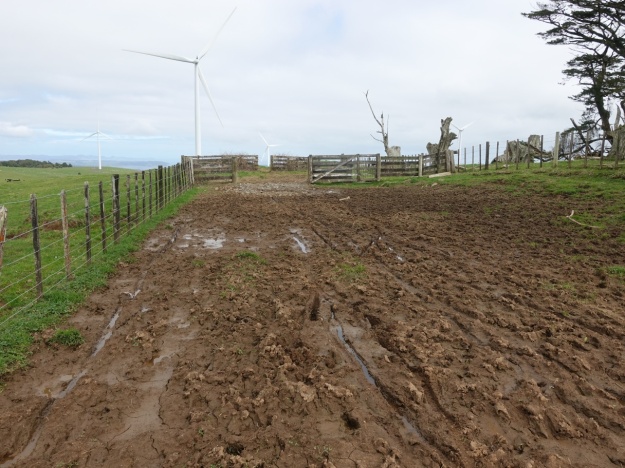 The windswept trees indicate that there is ample wind for the wind generators. This was definitely the case on the day. 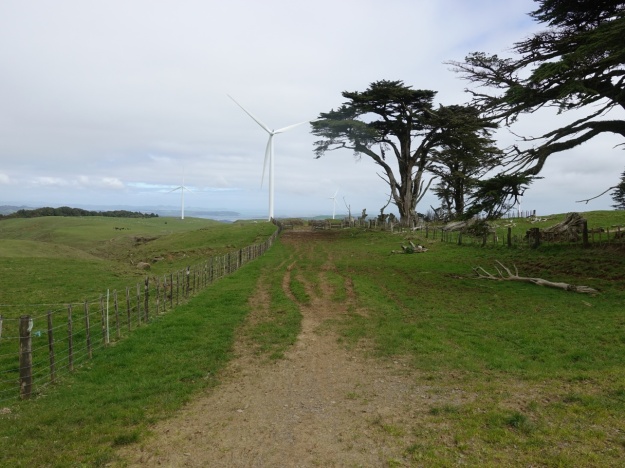 The trail ends here. Time to turn around and head back down the same trail. 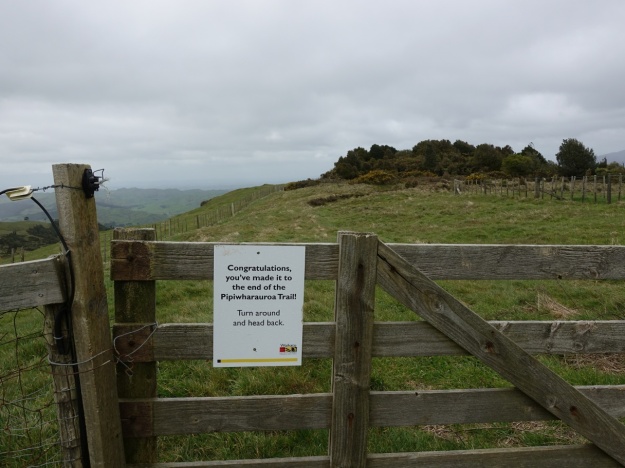 Although not a true mountain bike it did make it to the end of the trail and back down again. Without going off track this is about the closest you get to any of the wind generator towers. There is a definite periodic swishing sound as each wing passes in front of the tower. 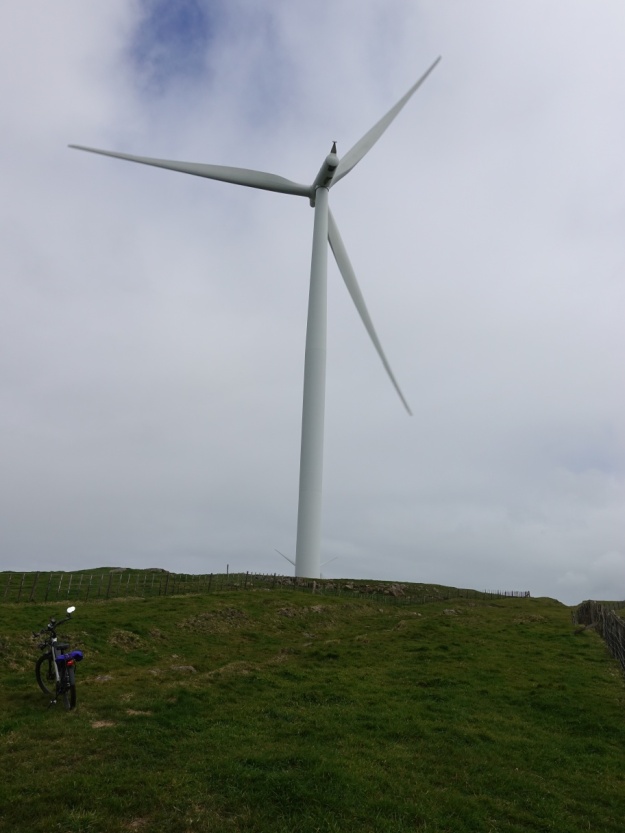 Fortunately there was help available at 3 of the four fence crossings where the bike had to be lifted over. The first gate was open as one of the farm people was just driving through it when I arrived. A runner who left the carpark at the same time caught up with me just as I was deciding whether to leave the bike and walk the last 1.5 km. He helped me across the stile. On the way back a group of 4 mountain bikers had just crossed over the stile, and two of them helped me get my bike across. At the last stile there was no help in sight, so it was a case of finding the best way to do it on my own.

The GPS tracklog shows the trail route, but does not show the parts which are on the gravel road, and which ones are on the farm tracks. The total distance was 17.5 km and the total time was 1 hour 50 minutes. This included time for photos, for stile crossings, and various other very short breaks. 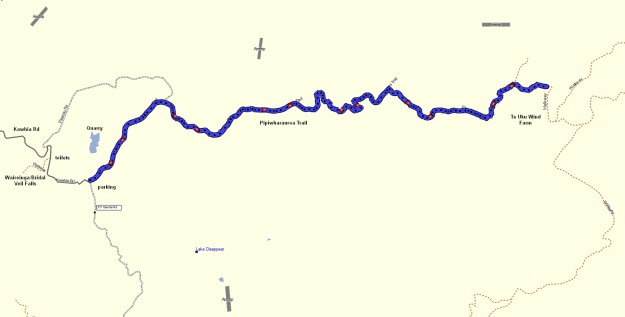 The aerial image, from Google Maps, shows the same area as the GPS map. The trail ends just to the right of the Te Uku Wind Farm text.

The topographic map shows the same area, with the Pipiwharauroa Trail also shown in the three places where it diverges from what is shown as Plateau Road.