Lake Te Koutu (also shown as Lake Te Koo Utu and Lake Te Ko Utu) in the heart of Cambridge is a natural lake formed during one of the later Taupo volcanic eruptions about 1800 years ago when debris swept down the Waikato River and blocked off many small side streams. Water backup up behind the debris formed what is now Lake Te Koutu. The lake forms part of the 17.6 hectare Cambridge Domain which was established in 1880. Information about the domain and the walks is available on the Cambridge web site and the Mighty Waikato web site.

The Cambridge Domain is located on two main terrace levels, with steep slopes between the lower level which includes the lake, and the upper level where there is direct access from Victoria Street, Thornton Road, and Lake Street. The main access to the lake level is off Albert Street, with a parking area near the lake. There is an elevation difference of about 27 metres between the lake level and the upper level.

There are toilets on the lower level near the entry on Albert Street and on the upper level on Thornton Road. There’s a children’s playground near the carpark area and a dog exercise area adjacent to Albert Street.

The entrance from Albert Street to the carpark by Lake Te Koutu. Toilets are partly hidden behind the tree to the left of centre. 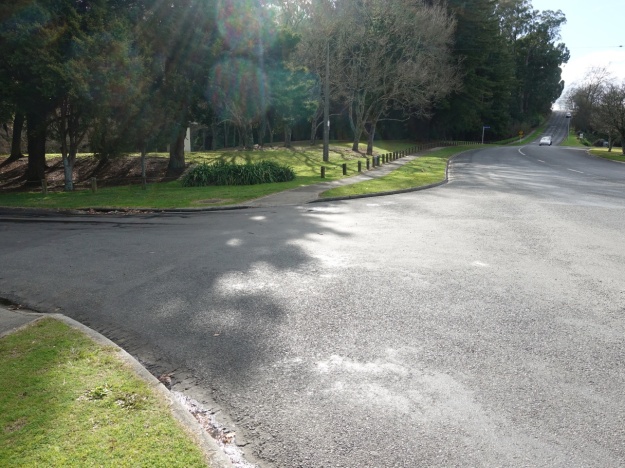 Looking from the entry off Albert Street to the carpark. A stairway leading from the lower level to the upper level can be seen above the leftmost vehicle in the carpark.

A sign by the lake near the carpark shows details and names of the tracks within the Cambridge Domain. The walk started with the Lake Circuit (number 1) followed by Camelia Track (number 7) continuing on around the upper edge of the domain to the Flow Form Track (number 6). There were tracks near the south-eastern corner of the domain which are not shown on this map and were not walked.

Looking back at the carpark from the Lake Circuit track. The circuit track is wide and well formed with no steps and only very gentle and small elevation changes.

Looking across the lake from near the carpark and an information sign with planned improvements to the area. The steep slope up to the upper terrace level can be clearly seen on the left.

The sign shows a draft concept plan for changes to the park area. Planned changes include removing the wooden retaining wall at the lake edge and replacing it with a gentle slope and vegetation.

Parts of the lake were very placid and reflective. The carpark is at the far and of the lake, and the buildings on the upper far right are located off Queen Street.

Various tracks with steps connect the upper level with the lower lake level of the domain. 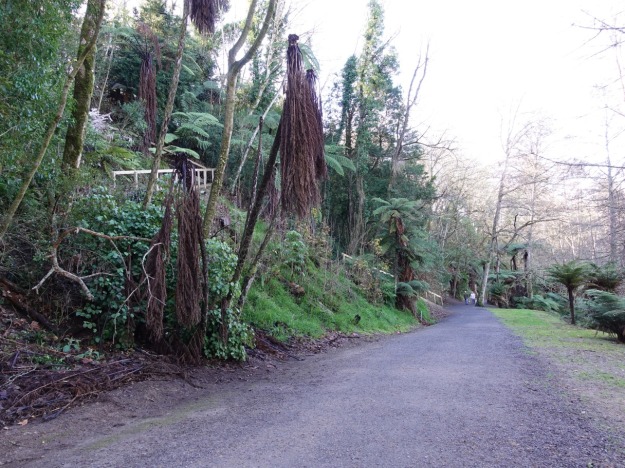 A tall douglas fir tree growing on the steep slope between the two levels. 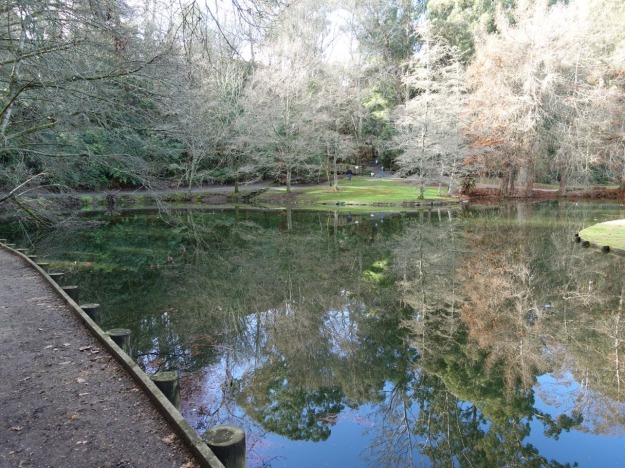 The lower end of the steps making up the Flow Form track. The bore supplying water to the flow form feature appears to have been out of action for some time, and there was no water flowing.

From the carpark at long stairway leads up to the Camelia (Camellia?) Track. The track passes an old concrete block building which was constructed as a pumphouse during World War II as part of a secret aviation fuel depot.. A nearby 2.7 million litre underground fuel tank was built nearby, with trees planted around it to provide camouflage. Fuel could be pumped from the tank to trucks near the edge of the lake. Fuel delivery to the depot commenced in August 1942. 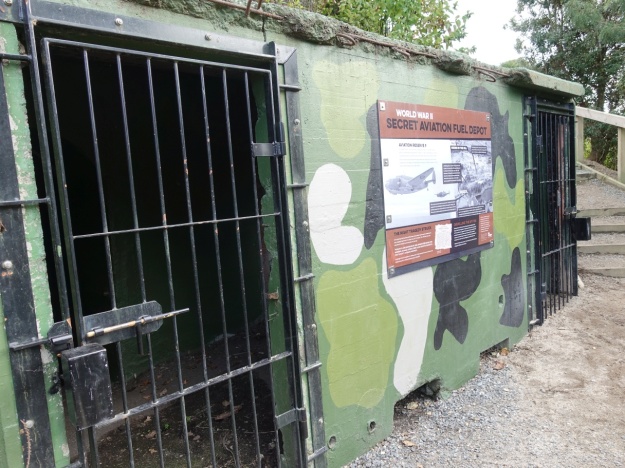 Looking down from near the top of the track leading past the pumphouse up to Camelia Track.

Looking along Camelia Track. Several of the camellia bushes were blooming.

An information panel showing the locations points of interest in Cambridge and surrounding areas. Originally Horotiu Pa, a large Maori settlement, occupied the whole Cambridge central business district. The township was established in 1864.

Looking eastwards down to Lake Te Koutu from the lookout off Victoria Street.

A centennial memorial near the intersection of Victoria Street and Thornton Road, celebrating 100 years of the township in 1964. The path continues alongside Thornton Road on the far left. The slab on the block contains a map of the district around Cambridge with some historical notes.

A shortcut through gardens alongside Thornton Road after passing behind the bowling club. The white glasshouse is Begonia House.

A short distance past Begonia House and the Society of Arts building the top of the Flow Form track stairway is located by the building at the centre. 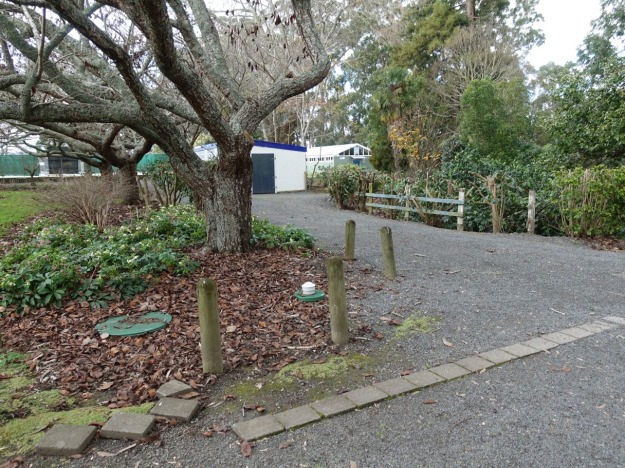 Looking down the Flow Form track steps and Lake Te Ko Utu Cascade. The flowforms were constructed in 1984. 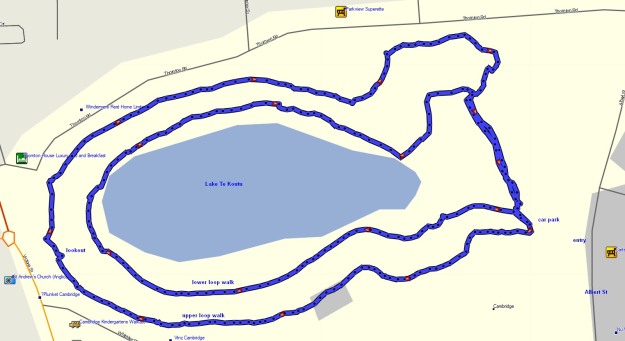 The aerial view, from Google Maps, shows the same area, but appears to be an older image as there are now numerous multi-storey buildings on and around the open area at the bottom centre of the image.